When we met with the City a couple of weeks ago, we were told that it will soon be possible to cross London Wall between Moorfields and Coleman Street by bike. Finally! The changes should take place later this year and include a cyclist crossing at the current pedestrian-only lights and allow cyclists to continue in a straight line over the paved bit of Moorfields up towards Bunhill Row. This is a parallel route to Moorgate and opens up a neat north-south link on quieter roads between Bank and Islington
Map showing the new route opened up by the Moorfields link

Cyclists can already turn in to London Wall from Coleman Street but only if they’re heading west or turning into Coleman Street from the east. Not very useful really.

There’s also been a kind of see-saw policy regarding cycling over the paved area on Moorfields. Technically it’s not legal at the moment but a lot of people cycle over the paving anyhow. The police went through a period of fining people for cycling over Moorfields last year. After a bit of a fuss by residents, the London Cycling Campaign and Cyclists in the City, we managed to get the City authorities to at least ask the police to stop the fines and simply hand out a warning.

So this development is great news. The creation of the Coleman Street – Moorfields crossing will finally create a legitimate cycle route that links neatly with the Bunhill Row route up to Islington and provides a really viable alternative to cycling up Moorgate.

The crossing now. This will soon become a cycle-friendly crossing over London Wall 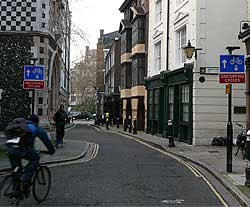 If you've come to this page from Twitter today, big apologies. I posted the wrong link. PLEASE CLICK HERE FOR THE LATEST UPDATE INSTEAD:

This is a long article. If you can't face reading the detail, then leap straight to the HOW YOU CAN HELP section below and see how you could play a role in making more of the City's streets two-way for cycles.

Last year the City announced it would make a number of one-way streets cyclable in two directions.

The two-way option opened up some very convenient new routes. The north-south link between Blackfriars Bridge and Smithfield being one that has apparently seen a solid increase in cycle traffic since the two-way infrastructure was put in place. Rob Ainsley's excellent Real Cycling blog profiled the new link here.

There was an awful lot of fuss at the time about the heresy of creating two-way routes for cycles. If you want to read the sorts of ranting and raving that went on, take a peek at comments in the Evening Standard here. Cyclists in the City attended some local residents meetings at the time, where a small but fairly determined group of residents had, let's call it, fairly strong views about the two-way streets.

Fast-forward a year, and a number of additional streets have since become two-way for cycles. Lombard Street among them. And, for the most part, the scheme sounds like it's been a success. There hasn't been chaos and mayhem. The scheme has broadly worked.

Getting this infrastructure in place took months of lobbying by pro-cycling people at the City of London. It took further months of testing and further months of high-profile information and more measuring to make sure the concept was working. Each street had to be agreed on a case by case basis and involved jumping through various internal hoops, the likes of which I don't fully understand and hope never to need to understand. Net result, however, is unnecessary expense and lots of potential barriers to making more streets become two-way for cycles.

This month, the issue of two-way cycling becomes really live. It might sound tedious and boring to most people but the City of London meets twice in September to discuss whether to allow two-way streets to become a 'normal' part of the street planning regime. What that would mean is no more hoop-jumping and layers and layers of approval. It would make two-way streets for cycles a standard part of the street pattern of the City, if the street engineers decide that a particular street needs opening up.

This is serious stuff. There are already discussions being had about a dozen streets that could be made two-way for cycles and that would open up a string of new routes for cyclists to cross the City from north to south and east to west. But that's only likely if the two-way project gets approval to become a standard piece of City planning.

And in case you're reading this and for some reason think the two-way cyclable option isn't for you, then consider Paris: 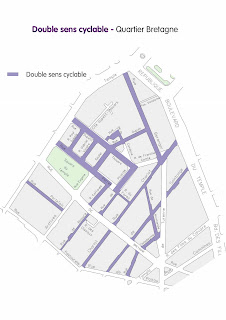 HOW YOU CAN HELP

Here's a map of the Bretagne neighbourhood in the 3eme quarter of Paris. The streets in purple are ALL two-way for cycles. Slowly but surely, Paris has committed to turning every single Paris one-way street into two-way for cycles.

So, by Paris standards, the City still has an awfully long way to go. It has a handful of streets that are now two-way for cycles. But the decision about whether to put in place a policy that will allow more one-way streets to go two-way for cycles could be a major step in the right direction and that decision is due in September.

You can help by writing to the City and sharing with them your experiences of cycling down the new two-way routes. A simple email would help, just letting them know how much you value being able to use the new routes, how it's made your journey safer or faster or encouraged you to cycle more.

Improving safety for cyclists is a particularly hot issue for the City at the moment (More on that in future posts but if you're interested in the meantime, take a look at this article that explains the background). The City knows it has a poor record in cycle safety statistics and this is a button you should push if you do decide to write. Two-way cycling allows you to chose more sensible routes for your journey, to avoid certain junctions and to find your way through the City whichever way feels safest for you.

If you can spare the time to drop an email to the City's cycling officer pointing out how two-way cycling makes your journey feel safer or easier, then please drop a line to jereme.mckaskill@cityoflondon.gov.uk

Alternatively, if you want to go higher up the ladder, then a letter to

Or, if you're really keen, then an email to your local alderman or woman (that's a councillor in any other borough). To find your local alderman you need to select your ward here and chose a contact from the list http://www.cityoflondon.gov.uk/committees/ward/selectWard.aspx

Indoor cycle parking on its way

Indoor public cycle parking will be springing up in two new locations in the City in October.

Some time in October, we should see bike stands going up in the car park. This will be a first step towards what should evolve into a fully-fledged facility with bike lockers, showers and mechanics is  in early 2011. The complete facility will be a project by the same company that is launching a bike / gym facility in Soho, namely http://www.h2clubs.co.uk/

The bike entrance will be here, on the north side of the road opposite Noble Street. But there will be handy entrances and exits on foot on the south side of London Wall near Noble Street and, cunningly, down by Moorgate end near Coleman Street.