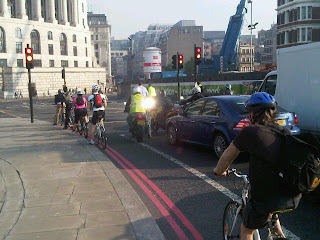 Following several Freedom of Information requests, Transport for London has finally released its road safety audit relating to the junction design at the northern end of Blackfriars Bridge. You can download the initial road safety audit here and TfL's responses to the audit here.
If one thing stands out in this report, it is this comment by the road safety audit team and the subsequent TfL response:


There are too many cables under the pavement, apparently, and therefore TfL can't accept a recommendation by its road safety team to make the cycle lanes an acceptable width.

What this shows is that TfL knows that it should have more space allocated to cycling here. But tellingly, TfL thinks that space for cycling can only be created by narrowing footpaths (which in this case is not an option). There's no effort whatsoever to reduce the amount of space given to motor traffic, just an obsession with making people on foot or cycles fight among themselves for what little space is left after TfL has added more space for motor vehicles.

I don't know why this comes as such a surprise. A couple of months ago, I blogged about the man in charge of London's roads thinks that people on cycles don't need safe space to cycle in. My understanding is that he thinks it's absolutely fine for motor vehicles to scrape past you at 30, 40 or maybe even 50mph and give you just a couple of centimetres of space when you're on a cycle.

But here are some other issues:

In my opinion, the audit report:

- completely fails to consider the safety of cyclists making the right turn into Queen Victoria Street. In fact, it acknowledges that this design may "lead to users inadvertently entering the opposing lane, potentially resulting in ‘head on’ type collisions


- completely fails to consider the impact of increased numbers of people cycling (the data used seems to be that from 2007) and though it talks about the risk of drivers cutting in to the narrow cycle lanes, it doesn't consider that the lanes are so narrow at some points that cycles have no choice but to spill out from the cycle lane, particularly of the segregated bit just north of Watergate. The number of cyclists is a big issue because the volume of cyclists doubled between 2007 and 2010 and will no doubt be higher still in 2011. Incidentally, that coincides roughly with the period that a 20mph limit has been in force.
- completely ignores previous cycling studies undertaken here, ignores the cyclists on bridges safety study done for TfL or the report done by TRL for TfL on TfL's procedures following the last fatality
- removal of New Bridge St pedestrian crossing: TfL rejects the safety recommendation saying its not an issue due to its clever software modelling then later on says that the software has only 'been used to forecast the most frequently used desire lines for the station', i.e. seems to have missed out this crossing.
The London Assembly will meet again on July 20 to vote for the motion to retain 20mph at Blackfriars. You can sign a petition in support of 20mph on the London Cycling Campaign website.

Last time they met to vote on this motion, the Conservatives walked out of the chamber, nullifying the process. Then, last week, Boris Johnson made a very clear statement rejecting 20mph but stating 'more works needs to be done on cycling over Blackfriars Bridge'.

Let's see what happens this week.