Councils need to learn how to design for safe cycling and Crossrail is showing the way: Southwark council installs hopelessly dangerous cycle diversion south of Blackfriars Bridge. Meanwhile, Crossrail to close Farringdon Rd, just north of the Bridge. But not for cyclists. 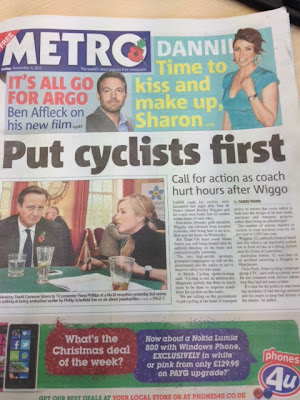 What's so ironic about this front page is that Southwark Council has just sent me a copy of its plans for the closure of the main cycle route along the Thames. The council admits 'not enough consideration was given to cycling'. It's worse than that. Just wait till you see the diversion plans, which I've shown below.

The picture below is a map showing the area just to the south of Blackfriars Bridge.

Many thousands of people cycle over this Bridge every rush hour. A good chunk of them cycle between Waterloo and Blackfriars Bridge along Upper Ground which is a busy but quiet cycle route parallel to the river. It is part of the National Cycle Network and people use it to avoid cycling along the  dangerous and fast alternatives, where there are several lanes of motor traffic.

The map shows the cycle diversion planned by Southwark Council that will come into effect later this month and last for 10 months. As you can see, the council expects people to cycle on Stamford Street rather than along the quiet parallel route.

Last month, a group of us from Sustrans, Living Streets and Southwark Cyclists met with the contractors responsible for new buildings going up around this cycle route. The meeting was coordinated by Southwark Council in response to anger at its decision to close the cycle route without notice.Well done to the Council for organising the meeting. Unfortunately, the results of that meeting are less than impressive:

At that meeting, we agreed that a temporary closure of Upper Ground makes sense. There are going to be dozens of lorry movements every hour in and out of some fairly tight spaces here. Something that is not compatible with hundreds of people on bikes.

But we agreed this closure made sense only on the basis that suitable alternatives would be put in place.

Pictured above, is what Southwark Council together with help from Transport for London seems to think is such as suitable alternative route.

Those of you who know this area will know that this alternative;

- will force people heading towards Waterloo to turn right across four lanes of motor traffic coming off the Bridge
- will point people towards Waterloo roundabout, one of the 10 most dangerous junctions for cyclists in London
- will see hundreds of people cycling along Stamford Street, a relatively narrow, fast-moving thoroughfare, shared with the dozens of lorries heading to sites on Upper Ground and further along this route at London Bridge.

Councillor Barrie Hargrove, responsible for making Southwark a safer place to cycle, wrote last week to one of his constituents:

"Can I start by saying that I agree with you. Not enough consideration at the early stage was given to the impact that closure of Upper Ground would have on commuter cyclists....We have been working with TfL with cycling safety as an absolute priority. This is why the decision to close Upper Ground to through traffic was reluctantly taken. I acknowledge that Upper Ground west to east is a national cycling route; however, sadly it has proven to be just not possible in that location to create an alternative cycling route to the standard of Upper Ground."

Fine. The Council has admitted it ignored cyclists on this busy national cycle route. But you would have to be insane to think this diversion is a safe and sensible alternative.As one rather influential cyclist put it to me last night "the irony is that Southwark is closing Upper Ground for safety reasons but the alternative they're suggesting is ten times more dangerous".

We haven't seen the road safety audit that was commissioned and which we understand was used to inform these diversions.It may be that there are some sensible suggestions on that audit. But none of them seem to be showing on this map.

I think the council is playing roulette with people's lives. It's not 'putting cyclists first'. It put the safety of its significant population of residents, workers and visitors who use bicycles last at Upper Ground and this diversion plan is nothing more than a bunch of signposts. Deeply unimpressed.

Meanwhile, slightly further up the same road, please be aware that Farringdon Road is going to close between Clerkenwell Road and Charterhouse Street from 12 November 2012 to April 2013.

But not for cyclists!

For cyclists, a southbound cycle-lane will be put in place in the closed section of Farringdon Road. This contra-flow lane will be segregated from northbound traffic. This means that cyclists will not need to use the diversion route."

Crossrail has pulled this off fantastically. The building project has sought to move as much waste as possible by rail, rather than by lorry. (Southwark could have insisted on delivery via the river at Upper Ground but it just caved into the developers and allowed lots of lorry movements instead). What's more, Crossrail has insisted all lorry drivers using its sites have cycle training. And now, Crossrail has built a cycle contraflow instead of forcing cyclists on a diversion with the cars and trucks. And why? Because Crossrail gets cycling. From what I understand, senior people in the Crossrail team are cyclists, care about cycling and 'get' cycling. It makes Southwark look completely illiterate.