The Office for National Statistics earlier today published another round of data from the 2011 census. One of the most compelling data sheets is the 'main method of travel to work'. Crunching that data  @geographyjim wrote on twitter that the number of people cycling to work in London has grown from 2.1% in 1971, to 2.4% in 1981, then dropped to 2.0% in 1991, hovered a 2.3% in 2001. And then in 2011, it ballooned to 4.0%. If you exclude the people who mainly work from home, though, you can see that the total number of people in London who work and who travel to work mainly by bicycle is now 4.3%.

Pictured above is a graph that shows the percentage of people who travel to work and use a bicycle as their main method of transport, broken down by London borough. The average in inner London is now 7.2%.

What's really astonishing, though, is to see how the bicycle is now overtaking car-use. If you look below at the population of Hackney that travels to work, more of them now go by bicycle than by car. In Islington, it's pretty much 50/50 split. 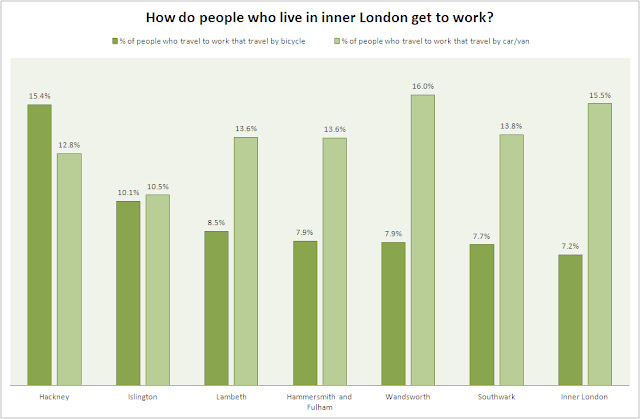 What this comes down to is policy. If you review the policies of Hackney and Westminster, you'll see that Hackney makes it easier to cycle than to drive. The City of Westminster, however, makes it easier to drive than cycle. Unsurprisingly, Westminster's policies have led to more people using cars and to the "parking stress" that Westminster complains is cluttering up its streets. It's not just me who thinks that. The Royal Borough of Kensington & Chelsea wrote an official objection to the City of Westminster's Local Plan last year saying that "Westminster’s [new] policies on residential parking policy and public car parks...would greatly increase the number of off-street car parking spaces in Westminster and, it is considered, would inevitably produce additional traffic congestion within Central London including the Royal Borough." Plan for more cars and, surprise, surprise, you get more cars. Plan for bike journeys and journeys on foot and, surprise, surprise, you get more journeys by bike and on foot.

If you look at outer London, the picture is pretty miserable, though.

With the exception of neighbouring boroughs Richmond and Kingston, there is virtually nothing going on when it comes to cycling. Places like Newham are really not far from central London by bike. Half an hour and you can be in the City of London. But only 1.7% cycle to work. My own view is that the hostile street environment in Newham and the refusal by that local authority (as in Westminster) to make cycling an attractive and cost-effective option for its residents. Newham could be another Hackney. But it's chosen the car, not the bike. I'd rather live in Hackney, frankly. 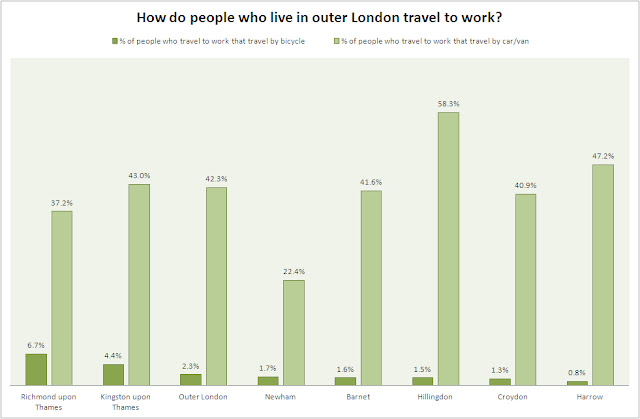 There is a lot more analysis to be done on this data. In particular, a look at the historic trends.But the fact is simple. Create conditions for people to cycle to work and they will. Create conditions for people to drive to work, and they will. Local authorities have to chose. In the case of Westminster and Newham, the councillors have chosen more cars. Let them live with the rising congestion, the rising pollution, the inefficient and ugly streets. And let the rest of us live in places where we can walk and cycle to work faster, more cheaply and without dumping congestion on the rest of the road network.

More on this topic in Friday's Evening Standard: