Some good cycling updates from Southwark as new cycling and walking footbridge opens. Just needs the rest of the link to come into place now.

Well done Southwark Council. During some major works to a rail bridge that runs over the Elephant & Castle cycle bypass, the council has insisted that contractors create a way through for people on bikes and for people on foot. Sensibly (and I wish this were standard practice in the rest of London), they've created a separate track for cyclists and another for pedestrians. The result is that it works for everyone and people feel they have a right to cycle through or walk through that is clearly their space. How different from so much of the rest of London.

I was heading east for a change at Elephant because I wanted to go and look at London's brand new bike and pedestrian-only bridge that was officially opened late last week. The Connect2Southwark Bridge is the result of over a decade's work by Southwark councillors and Southwark Cyclists.

Let me guide you on my journey to the Bridge from central London. After I'd nipped through the construction works pictured above, I took Southwark's London Cycle Network routes 22 and 23. And they're pretty impressive, to be honest. You get to whizz along the not bad segregated bike tracks that now extend most of the length of this section of the New Kent Road. The only downside is that you can wait ages at the lights to cross from the bike track over to the other side of the main road. Traffic flow for people in motor vehicles must come before traffic flow for people on foot or bike, of course...(Although, some fairly massive news just in is that Transport for London - which operates all of London's traffic lights - has started reviewing how it models traffic behaviour at traffic lights to better account for pedestrians and cyclists. This is a very significant development, as cyclists and pedestrians are woefully unaccounted for in most of London's traffic planning at the moment)

What follows from here is a whole series of roads that have been nicely traffic-calmed with speed humps and are the sort of thing you might find in parts of Hackney. The only difference is that Southwark hasn't been quite as bold as Hackney and there are no filters along these routes to stop lots of through motor traffic.

You then have options of using the road route or of cycling through the newly revamped Burgess Park. Burgess Park provides a decent east-west off-road route but there's one thing I just fail to understand. There's no street lighting. So, if you want to cycle through here at night, you're at the mercy of the darkness. That's hardly going to inspire most people to use the park as a sensible cycling route. Apparently, the council doesn't want to create light pollution in the park. It's happy to stick excessive lighting all over its estates but not along a major bicycle transport axis. Just weird.

There are some small but nifty pieces of street design intervention that make a real difference on the journey. Things like this bike crossing pictured on the left. Here, the road traffic is slowed down by a speed table and there is a clear space created for cyclists to position themselves in a way that they can cross the road and carry straight over. Small intervention that makes a big difference.

The route towards the bike bridge is pretty decent. You pedal your way through 1980s housing estates in a completely straight line through some  nice motor traffic filters that mean only bikes and pedestrians can go all the way through and motor cars have to stick to the main road to get anywhere. It's a fairly decent route. Until you come to these things: Horrible cattle pens (one of which seems to be brand new) that make this route unusable on any sort of larger utility bicycle and just make your heart sink when you see them on a bike. They're basically saying cyclists aren't welcome on their own bike routes. There's simply no need for this sort of rubbish. The Dutch and Danish would use double bike speed humps to slow people down and simultaneously render the route unusable for mopeds. We use horrible cattle pens that have no place on a bike route. 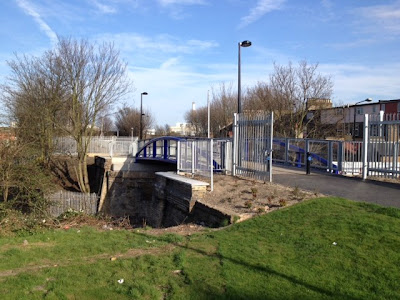 And then we come to the new bridge itself. It's actually a really exciting and beautiful thing and used, in fact, to be a railway bridge. You can see pictures of the old bridge being removed by crane a few months ago and the new bridge being gently lowered into place. Brand new cycle path; clear bike route signs everywhere you look; plenty of space for pedestrians and people on bikes to get past each other. It's very very nice indeed.

The new bike bridge whizzes you over the Rotherhithe New Road. And then you carry on a few hundred yards on a brand new, wide cycle-and walkway. And then you literally bump into South Bermondsey train station.

The route, proposed by the fabulous Barry Mason of Southwark Cyclists, is intended to continue through the station (there are empty arches immediately either side of the station entrance, just filled with earth and weeds) and then past Millwall stadium and off into Rotherhithe. Except for the time being that's not the case, you literally come to the end of the line and you're left trying to work out where to go next. There is a diversion in place for the time being but I must admit that I struggled to find it last week.

Part of the reason that the route doesn't sweep on past the station and into Rotherhithe is that the land on the other side of the station is not in Southwark, it's in Lewisham. So, in order to connect South Bermondsey (in Southwark) to Rotherhithe (also in Southwark), Sustrans (which has been integral to delivering this route) has to convince Lewisham council and a whole host of landowners to allow the route to continue under the railway viaduct.

Sustrans and Southwark council have done a good job here (albeit, I simply can't understand why it's acceptable to build cattle pens on bike routes or not have street lighting on bikes routes either). My understanding is that money had to be raised from all sorts of sources, including Lottery funding and a whole heap of landowners had to provide permission for even the odd few metres of bike track here and there. No small job.

I have to hope that Lewisham council will join the party and help the link to become whole because it will make a fantastic, long-distance route that could really opens up a decent orbital route across a sizeable chunk of south-east London when it's finished. And in the meantime, I'll continue to wonder why on earth infrastructure for bicycle transport is so poorly funded, such that we leave charities to raise the funds together with local councils, which are themselves fairly cash-strapped, whereas many road schemes seem to be funded with largesse from central government.