Blimey: Vauxhall to Pimlico cycle track that looks and feels like a real cycle track. Oval plans also published. Step change on all previous plans. Still some major niggles in the central Vauxhall section of the scheme, though. Online consultation now open.

Blimey. How things have changed. Back in 2011, I first profiled the plans for a cycle super highway route between Vauxhall and Pimlico. The plans were downright awful.In December 2012, revised plans emerged that were considerably healthier. Finally, after months of planning and meetings with local people and companies (to sense check what is acceptable/what is not), TfL has released the plans it intends to put in place by October this year. And, boy, are they interesting. As a rule, they introduce proper #space4cycling and also achieve more space and better road crossings for pedestrians in this notorious-motor-traffic-must-come-first environment. That said, there are some sections that could do with improvement.

It is well worth you spending time sharing your thoughts on the online consultation hub as they will be needed (critical support is fine).

I live just behind Vauxhall gyratory and use the area day and night on a bike, on foot, in my car, in the bus. I cycle through here on a road bike for training rides and I cycle through here with my shopping or on my way to work. I know many of my neighbours, now in their sixties and seventies, who used to cycle through here but no longer have the desire to pedal through Vauxhall because they can't face the conditions. I think these plans - albeit with some adjustments - have something for all these types of cycling. They also make it a damn sight better on foot as well.


In summary, the plan is to build a two-way cycle track between 3-4m wide between the Oval and Pimlico, separated by a ridge from the footway and 0.5m from the carriageway. The track takes a more-or-less straight line through the messy and downright dangerous gyratory, continues right across the Bridge, through the nasty junction on the north of the Bridge and then gives you options to continue north east through Pimlico towards Whitehall up Regency Street or northwest up a not-yet defined route towards Victoria. The original proposals had people cycling around the gyratory, crossing five lanes of traffic twice. I don't need to remind people that a man was killed cycling through the gyratory last month. The new proposal provides a route I think I would use on my road bike, just as happily as on a Boris bike and that I'd be happy to pedal with my mum. That is something of a first for inner London. There are plenty of benefits for lots of road users here, albeit some things could be improved. My thinking is that, overall, the plans should be supported but some elements could be improved. Whatever your feedback, I think it is important to keep it realistic. Not all solutions are possible, not everything can be catered for. But, for the most part, these are a big step up on what we've got currently and are lightyears ahead of the original scheme which was meant to go in here.

First the not so good bits.

The plan widens pavements at many points, for example outside the Royal Vauxhall Tavern (in the picture above), which is currently a narrow shared path that can be packed with people waiting to cross on foot and on bike. Yes, it's true this part will still be shared space. But they've removed a whole lane of motor traffic on both Harleyford Road and Kennington Lane to create that shared space, including one lane under the railway bridge which becomes the westbound bike track once you get past the Royal Vauxhall Tavern. That is two lanes' worth of space added for people on foot and bikes. Pedestrians are going north-south here and bikes east-west and the volume of people is not inconsiderable. It is a very busy area packed with people crossing the road at rush hour and busy into the evenings.

Could this piece of the scheme be done better? Possibly, yes. For example, I don't understand why the bike track couldn't be bi-directional under the rail bridge, instead of split in two - eastbound goes through what is now a shared pedestrian/cycling tunnel and westbound takes the place of one (current) eastbound motor traffic lane. That would allow both bike lanes to run through what is currently a motor traffic lane and would mean a clear cycle-only route through what is currently planned to be shared space opposite the Vauxhall Tavern?

If you look at the central section of the scheme (directly above the bus station on the layout above and pictured right), what you have at the moment here is a series of shared crossings that are insanely narrow and jam up at rush hour. They are heavily used by people on foot and on bikes. It is good to see the current shared use crossings will become pedestrian-only crossings and made twice as wide as currently. There will then be separate crossing points for people on bikes. So far, so good. But I'm not entirely wowed by the rather wiggly nature of this part of the scheme, with the bike track tucking slightly up Albert Embankment to give waiting road traffic a space heading north. It seems a bit unclear what's going on here with lots of stop/start changes and switching from cycle track to shared use and back again. That said, I cannot work out how I'd reallocate the space in this traffic island much better given the rules I'd have to work within.

I do wonder whether some cyclists will want to ignore the bike track and this slightly complicated set of three crossings in the centre of the scheme. In particular, heading south east, it might seem easier just to hop on road and go with the traffic.  That said, there are no traffic lights heading southbound until you round the corner whereas there are on-road. Heading north/west, however, the track is a clear win against the road and you would need to stop (assuming all reds) at three traffic lights on this bike track. By comparison, you would currently need to stop at three, possibly four lights and a give way on the on-road routing around the gyratory and through the bus station, covering a far greater distance and having to contend with a number of fairly hairy manoeuvres across multiple lanes of motor traffic.

Now to some of the really not bad or good bits:

The bike track across the river is fab. 3.7-3.8m metre wide and simple to use at both ends (although I have some concerns about how you'd turn right from any of the approaches to the northern end of the Bridge). The sections away from the centre are generally fairly swish with straight lines, priority over side roads or direct traffic light-controlled crossings. In a couple of places, general traffic turns have been banned which means cycle traffic will be able to go on green at the same time as straight ahead motor traffic (if the UK had laws like the US and Europe, we'd be able to come up with a better solution that didn't ban turns but the Department for Transport are luddites on this issue).

There are a number of new direct crossings for pedestrians replacing existing two stage crossings, for example on Harleyford Road, so you can walk across the road in one go rather than having to wait up to three minutes in the central reservation. The pedestrian crossings at the south side of the Bridge are made significantly wider too, with more space for everyone (and it gets extremely busy on these pavements at the moment) to manoeuvre around each other. This is well overdue as the current crossings simply cannot cope with the volumes of people on foot, let alone the current 'shared' with bikes mix.

There is also some extra space created for motor traffic at the northern end of Vauxhall Bridge with a new wider left turn lane.

At the eastern end of the scheme, there is a new genuine link between the two sections of the busy Lambeth cycle route 3 between Clapham and Waterloo created by introducing a proper crossing at Meadow Road (see diagram below). The two sections of the cycle route are currently broken at the Oval where cyclists have to cross right across four lanes of motor traffic on very fast corners with bad sightlines. Or they have to exit the road on a tiny bike slip onto a pavement that is hardly wide enough for two people, let alone pedestrians and bikes. It is very sub-optimal and pretty dangerous at the moment. Those problems will be comprehensively sold by the plan to widen the footway and include a cycle track here.

For the most part, this scheme has the look and feel of a proper cycle track. The sort of thing that someone who doesn't currently cycle would look at and regard as safe, intrinsically easy to navigate and easy to use. It is just the central bit that seems a bit odd, rather wiggly and over-reliant on shared space, whereas the rest of the route has clear tracks and clear desire lines.

These plans don't yet show what's going to happen north west of this scheme. There are a number of options to get people up towards Belgrave Square (which will ultimately link to Hyde Park). Three options are up for discussion here. Option 1 up Belgrave Road and make bi-directional on a bike (I think probably the most sensible option), Option 2 with northbound cycling on Belgrave Road, southbound on Lyall Street and a weird wind-about all over the place option 3 which I won't even bother to describe.

My understanding is that the scheme is due to be on the ground in October. And all I can say is wow. It has been four years in the making just to get this far. The original plans were nothing short of a scandal. And here is something that looks and feels like I could bike through here with my mum. Or my sister could bike here with her kids. There are thousands of new homes being built at Vauxhall as we speak. I could pick holes in aspects of the scheme. But my overall impression is that this thing deserves support. And on a purely selfish side (sorry), it will make my year if this gets built. I would like to see some sections improved in particular in the central section. But I can see those sections just about working (for now) if they go ahead with no further changes. This is my neighbourhood. It is a horrible place to bike or walk at the moment. I don't much like driving here either. This scheme makes the walking and cycling options properly attractive rather than something fitted in around the edges. That will make a big difference to me every single day. Let's get these junctions sorted out. Not just here but all across London.

Meanwhile TfL has also released what I think are generally very impressive plans for Oval junction that resolve two of the pretty nasty movements through this junction in a meaningful, serious way. I'll be blogging on those tomorrow. Meantime, take a look at TfL's Oval page. 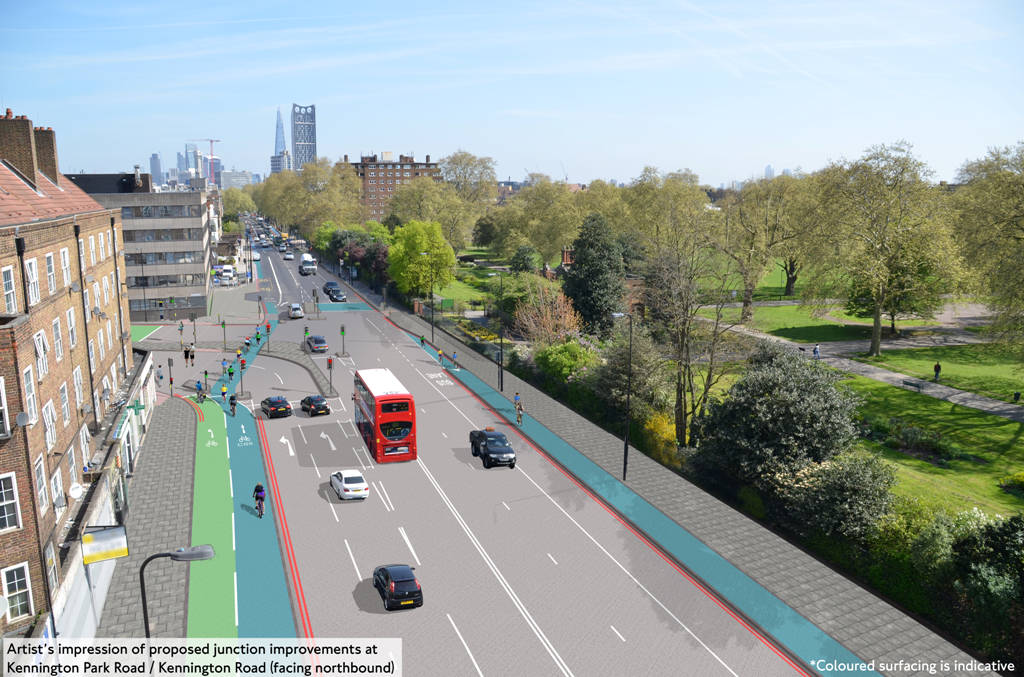