Something quite amazing is happening: Over 50 Chief Execs of big London employers have already written to Boris telling him to get on with building the cycle super highways. The wind direction is blowing in favour of this change. You need to get involved.

Mediacom is a big global media player. It sent a clear message out last week saying that it intends to back the Mayor's plans for cycle super highways in central London. Their tweet below states very clearly why it thinks this is important. And it is not alone. 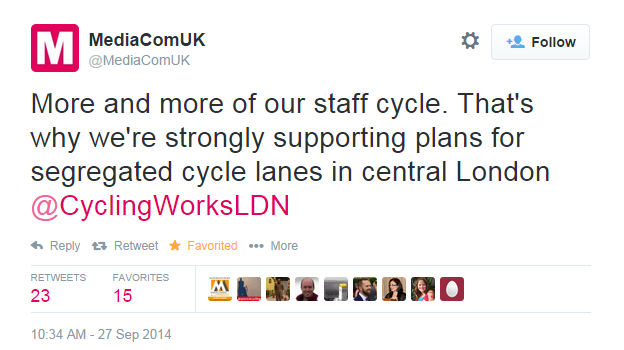 What is clear is that employers big and small are lining up to get behind the cycle super highway plans. What is also clear is that what I'm going to write below only scratches the surface. Many, many more are coming.

Let's have a quick look at what's happened so far.

This week, the senior partner of the £1.1billion revenue global law firm Allen & Overy added his voice: "The roads of London have to be made safer for cyclists. This is a business issue as well as one for the wider community. As a civilised society we must take all necessary measures to keep people travelling about their daily business safely. Segregating cyclists and other traffic seems to be one of the most efficient and effective ways to achieve this. This is a message that is resonating around London businesses and other employers who are lining up to tell the Mayor they back his plans to build two safe, continuous, comfortable cycle super highways through central London."

He is joined by a company statement on behalf of Deloitte UK, one of the big four global services firms.

The NLA, London's Centre for the Built Environment issued a statement this week "[urging] its members to respond to the consultation; to comment on detail and support the overall proposals"In fact, a whole host of major property agencies, developers and investors have got behind the schemes. So far, we've seen property giants The Crown Estate, Knight Frank, Barratt Homes and Jones Lang LaSalle state their support. The mega agent GVA Grimley (which manages properties worth over €40billion) has also just put out a press release stating "Property consultancy GVA has thrown its weight behind plans to expand the existing network of Cycle Superhighways in London, as a TfL consultation over the scheme's expansion gets underway...cycling should form a key part of any major city’s integrated transport infrastructure."


Yesterday alone, 13 more CEOs did just that. Employers ranging from charities, to small tech companies with 50 employees to multinationals with 10s of 1000s of employees are getting behind the schemes.

In the health sector we've so far seen support from the CEO of NHS Barts Health Trust together with the CEO of the British Veterinary Association, the Director of the London School of Hygiene & Tropical Medicine and the Managing Director of British Military Fitness

More tellingly, the Chief Exec of the London Air Ambulance has this to say: "We treat some of the most critically injured people in London and unfortunately one of the sickest patient groups are these cyclists who have been injured by large vehicles..We hope the proposed new measures will help to reduce the number of casualties and will be following these plans with interest."


In the real estate sector, the NLA - the Centre for London's Built Environment - has "urged its members to respond to the consultation; to comment on detail and support the overall proposals"; the Head of PR at KnightFrank has responded on behalf of his firm; the CEO of JonesLang LaSalle UK, the regional managing director of Barratt London and other architects and property investors.

The Chief Exec of Shakespeare's Globe theatre has supported the plans and called on other theatres do the same. The cycle highways will benefit actors, staff and audiences, he says.

The updated list of employers who have put their names behind the cycle super highway plans and chosen to do so in public is on the Cycling Works website and it is growing by the hour. China Daily and Euromonitor added their names yesterday, alongside other UK media and information businesses. The National Endowment for Science Technology and the Arts has joined a whole host of big and medium-sized technology companies, including Equisys, Marmalade and Digital Craftsmen.

I think this is genuinely incredible. It would have been very hard to believe, a couple of years ago when 10,000+ of us were shivering in the rain on the London Cycling Campaign Go Dutch ride, or when a few thusand of us took to the streets to protest at Blackfriars, that we would eventually see major multinationals, charities, hospitals, software and tech companies, real estate investors, media companies and retailers all coming together to ask for responsible, safe routes for cycling through central London.

The wind is blowing in the direction of safe, convenient cycling in central London. Responsible employers are backing this because it helps their business but also because it protects their employees. If you read some of these messages of support, there are genuine and harrowing tales of staff maimed and, in some cases, killed, on their journeys to work. Deaths and injuries that are preventable.

If your employer isn't behind this, they should be ashamed of themselves. So many others are leading the way. Take action now please, if you can.