Bring back Boris? Sadiq suggests we should have narrower cycle tracks and promises to 'make sure cars flow smoother'. That policy failed 8 years ago & was conclusively rejected by Boris

Five years ago, I never thought I would say this but I am really going to miss Boris Johnson.

Five years ago, Boris's strategy was to get London moving by 'smoothing traffic flow'. This was an awful, awful strategy that involved removing pedestrian crossings. It meant that Blackfriars got redesigned for cars and only for cars, even though the vast majority of people used that junction on foot. The pedestrian crossings over Blackfriars Road (north of the bridge) got ripped out, for example. In other words, it was bad for everyone who wasn't in a car, not just for cyclists. What's more, although it's hard to prove for definite, my own feeling is that 'smoothing traffic flow' was a direct contributor in worsening collisions and increasing casualties on London's roads. Oh, and what's more, it didn't seem to do anything to improve congestion. You have to remember that all sorts of things impact congestion - like the fact that London's population is booming, like the fact there are thousands more private hire cars and white vans on the road each and every month. 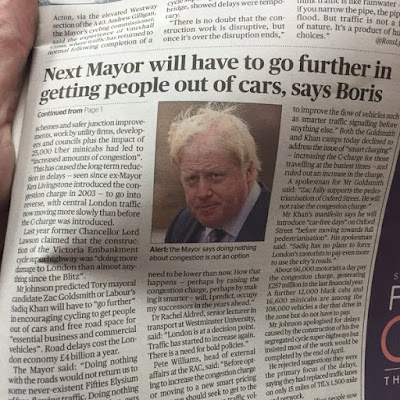 And that is why the 'smoothing traffic flow' strategy was conclusively buried by Boris a few weeks ago. The Evening Standard carried a headline page with Boris saying that the next Mayor would have to extend the congestion charge. Why? Because the only way to make London's streets work efficiently is to get people out of their cars. Boris says exactly that to the Standard.

Both Zac and now Sadiq have promised NOT to extend the congestion charge.

But this latest comment from Sadiq Khan just blows my mind. Speaking to Nick Ferrari of LBC at a hustings, Khan says three things that are just mind-bogglingly awful.

Nick Ferrari (not known for his love of cycle lanes) interjected with some proper common sense "but
road works are going to cause problems". Nick's right. Building cycle highways = congestion. Once they're built, as at Vauxhall, the congestion goes away, the number of people goes up.

But then Sadiq Khan makes it even worse.

"You don't have to have [cycle] lanes as wide as we do" - Seriously? Wide cycle lanes? They're only just starting to be built close to international best standards.

"You don't need to have permanent obstructions in the road" - So that means no more segregated safe space for cycling on main roads or at junctions does it? Which is odd because Sadiq Khan's manifesto promises more segregated cycle highways and safer junctions.

"We have to learn the lessons to make sure cars flow smoother" - This is the most pernicious one. It really depends what Sadiq Khan means here. 'Smoothing traffic flow' hasn't worked in London. It is an awful policy that some people within TfL still cling to but which simply doesn't work. As Boris Johnson says, we need a Mayor who has the guts to get people out of their cars. Both Khan and Goldsmith seem to be ducking this fundamental truth.

Caroline Pidgeon (LibDems) and Sian Berry (Green) are the only candidates talking sense on this stuff at the moment. A fuller review of what they have to same is coming up.

Meanwhile, here's the new Blackfriars Road cycle highway in action. It's not even fully open yet. Narrower lanes here? We don't need segregated, permanent safe space for cycling here? It should all be about smoothing flow for cars here? I think not.

Zac Goldsmith finally commits: "I will build more segregated cycle lanes" but then says only if the community fully supports it - I'm worried that he's failing to say what he really thinks and that by trying to be nice to everyone he will end up setting communities against each other.

I've spent a bit of time on this blog recently trying to get my head around Zac Goldsmith's thoughts on cycling. I admit, I haven't given as much time to Sadiq Khan. The reason for that is that, on paper, the two candidates have very similar policies.

Goldsmith promises to "continue to support the Cycle Superhighways and the Quietways programme".

Both, however, hint that there's something they don't like about the Cycle Superhighways.

Khan says London must "learn the lessons from earlier [cycle superhighway] schemes", which seems to suggest he thinks something's not quite right, but he at least acknowledges in his manifesto that he will "focus on segregated provision".

Goldsmith does say in one article on Essential Surrey's website that "I will build more segregated lanes on London's roads". But there is no commitment in his manifesto to do that. In fact, Goldsmith's manifesto says nothing about segregated cycle tracks at all. In fact, what Goldsmith's manifesto actually says is just downright strange, in my view. His manifesto is packed with rock-hard commitment to things like a new Silvertown road tunnel or to pedestrianising Oxford Street. But when it comes to cycling? Oh no, no such commitment. What he says instead is that he will only support cycle highways if they have "community consent".

So, on the one hand, Goldsmith is happy to bulldoze massive chunks of south east London for the Silvertown road tunnel, something which all but one local authority opposes and will blight residents with more traffic in those areas for ever. On the other, a cycle highway? Oh no, can't have that if people think it might not 'work for everyone'.

While on paper, then, both candidates initially look quite similar, the differences really start to emerge when you look at the detail. Perhaps, of course, because there isn't much detail from Khan.

What is odd, though, is that Goldsmith seems to keep seeking out ways to make his messaging on cycling worse.

He attended a meeting on Thursday last week specifically to discuss the plans for Cycle Superhighway 11 through Regents Park. I'd argue this is an extremely local issue. And here's the possible future Mayor of London deliberately sticking his neck out to talk to local voters about a cycle highway. What he promised during that meeting is that, if elected, he "will require TfL to adapt their plans to the community, in such a way that they meet the overwhelming support of the community" and he will re-run the consultation on cycle superhighway 11. That consultation, by the way, had over 6,000 responses, of which 2/3 supported the cycle superhighway.

I think there are two problems with Goldsmith's approach. Firstly, when is a consultation not a consultation? By promising to re-run the consultation, he gives the impression that he's the sort of person who will keep re-running consultations until he gets what he wants. Not great. There's clearly a large community of people who support the cycle highway plans and some vocal locals who don't. Which community has the most 'rights' here? Only the people who live on these particular streets, or the people who make use of them?

Secondly, I think it is impossible to design transport infrastructure solely by local community approval. It just doesn't work. At Vauxhall, for example, a handful of residents were very forceful about opposing the cycle highway. If Mayor Zac was in power, would that have meant no safe cycling through Vauxhall? That cycle highway has only been in place for a few months. We know now from TfL that there has been a 73% increase in cycle journeys as a result. And we also know that motor traffic is back to normal. Are we saying that, under a Zac mayorlty, the support of a handful of residents would be more important to him than creating the safe cycle infrastructure through Vauxhall?

The result of this sort of flip-flopping, is that people who are watching Zac Goldsmith are getting more and more shrill in their opinions. On the one hand, some local residents are talking on twitter about waging a 'war' against cycle highways. On the other, it's quite easy for cycling campaigners to really rage against Goldsmith about all of this (and many are).

The noises being made on both sides are getting increasingly ugly.

I think, in large part, because Goldsmith is trying to please everyone on the way and giving both 'sides' fuel to their fire.

I'm trying to give the man a fair reading but his approach feels really unhealthy. I think it shows poor judgment and poor leadership. And that's very worrying for a potential Mayor.

Do people think I'm being reasonable and reading this right?