Beware of the cyclist! 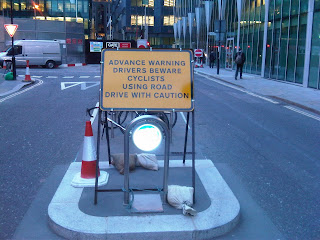 This is the first time I've seen one of these. A sign warning drivers to watch out for cyclists.

There's a building site right behind the sign here (the new Heron tower at Barbican) and the road is too narrow for a car to pass a cycle safely.

I think these signs are all something to do with the Mayor's push to make cycling something that contractors have to consider when they lay out roadworks. Hats off to the City for being one of the boroughs to implement the scheme.

Funny language, though. It's a very wordy signpost. I think the 'Drivers Beware! Cyclists Using Road' has potential for lots of comedy interpretations. Sadly, I think most drivers who don't cycle (and that makes most of the population) don't expect/want cyclists in the road space. In fact, I'd hazard a guess that most of them think people don't deserve to use the road space at all unless they're in a car. Which is the semi-comical / semi-tragic undertone of these signs, after all.

Sadly, these sorts of signs should be all over London. Notably at pinch points like the one on Holborn Viaduct opposite City Thameslink where the street engineering forces cycles into the main traffic flow at a fairly sharp acute angle and through the funnel in the 'Wall of Steel' where it simply isn't safe for cars to overtake bikes. And yet they do. Especially taxis. That like to intimidate less daring cyclists and play chicken with them at just these sorts of stupidly-designed pinch-points.

But then, of course, we people who chose to travel on a bicycle don't deserve proper, safe instrastructure, do we now?