The City of London and one of its motorway junctions 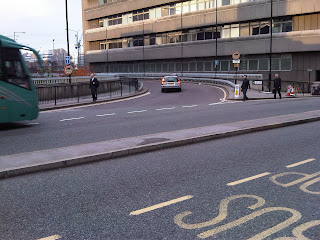 This is the scene at Queen Victoria Street where a two-lane slip road leads vehicles on to Upper Thames Street.

This junction is a nightmare for two reasons.

Travelling east to west along Queen Victoria Street by bike, you get cut up by motor vehicles that overtake you as they leave the 'ring of steel' chicane and then swing left in front of you into the slip road. (actually, I've had a lengthy email correspondence with Redwing coaches about this junction after two of their coaches nearly ran over me near this point. Hats off to Redwing though. Their operations officer was absolutely engaged, took the issue very seriously, has promised to instigate proper cycle-awareness training etc). Anyhow, I digress. This slip road is classic left hook territory. Why on earth there is a motorway-style slip road in the middle of the City of London just next to one of the main train stations beats me.

If you're a pedestrian coming from Blackfriars and heading towards the Millenium Bridge, you're faced with either tunneling through a subway under this slip-road or you do what most people do, you walk around the side of the metal railings, actually in the street. There are a couple of people doing exactly that in this picture. And then you leg it across the slip road while the motor traffic accelerates to 40-50mph on this nasty stretch of race course slalom.

Funnily enough, this junction never comes up at City of London meetings about transport or walkway problems. That's mainly because most of the elected politicians don't seem to care about cycling or walking. 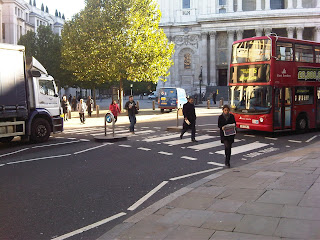 What they do care about is this zebra crossing opposite St Paul's on Ludgate Hill. Several times, I've heard City politicians and planners complain about this crossing and refer to it as a problem. Guess what the 'problem' is? Simple: the problem is that City politicians don't like the fact they have to wait in their taxis in a queue of traffic while pedestrians have the extremely rare right of way.

And the only reason this crossing hasn't been replaced by a traffic light is because the City planners think traffic lights in front of St Paul's might be ugly and they can't think of a better solution.