"Public spaces outside Crossrail stations will be made safer, more attractive and pedestrian friendly after Crossrail announced it has finalised a Memorandum of Understanding with local authorities, Transport for London and Network Rail.


Around every station Crossrail's urban design team, working with the local authority, will work to create new and improved public spaces that integrate with existing transport services.

The new Crossrail stations offer great opportunities to improve public areas at street-level - whether it is by bus, cycle or foot."

Hooray. Cycling gets a mention.


So, let's take a look at some nice improved cycle infrastructure proposed for the City of London at the new Farringdon station.

Here's a view by the new Crossrail staton at Farringdon's Smithfield exit. Happy cyclist heading west towards the market:


But now let's see what this street scene looks like when you add a car into that impossibly narrow lane heading west. And hey presto, the cyclist disappears. Squashed by the car. Because funnily enough that lane isn't wide enough.

Images like this from Crossrail really get on my nerves. Because they make politicians and transport planners think that the lovely new streetscape will be a harmonious place where cars, pedestrians and cycles will all mingle with plenty of space for everyone. 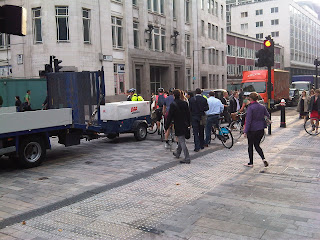 For another example of happy shared space where cars, pedestrians and cycles all have equal priority and a reasonable allocation of space on a City of London road, let's have a look at one we made earlier. This is Queen Street junction with Cannon St. A classic, architect-designed shared space where people have to squeeze between motor vehicles to cross the road. This crossing is actually the main cycle route into the City of London, emerging directly from the end of Cycle Superhighway 7.What you get is a load of barricades, some shared space made of appallingly slippery and broken fancy brickwork and a lot of traffic lights, which give priority to motor traffic heading east to west across the route. No wonder people jump the lights or cycle fast across these junctions. They simply get fed up with the fact it takes about five minutes and four sets of traffic lights to cycle about 500 yards and that they have to slalom across the dangerous brickwork.

Mind you, if you cycle along the road (pictured here with the queue of non-moving vans) itself you'll find yourself squashed in a less than 1.5 metre cycle zone between a lorries, coaches and a couple of taxis as you wobble towards the newly (and thumbs up to the City here) redesigned Mansion House junction.

This is on the day before the government scraps Cycling England. Apparently local authorities know more about how to design good cycling facilities than this cycling-focussed body: "Norman Baker, the Under Secretary of State for Transport, told BikeBiz that scrapping Cycling England was part of a move to give more power and responsibility to local authorities, saying “We want to give more power and more flexibility to local authorities as we strongly believe that they know best what is right for their communities.”

I fear that those local authorities really really don't get cycling. Sorry Norman.