The Evolution of the Cycle Lane from New York to London

"A commitment to cycling is a commitment to sustainable transport, congestion reduction, safer streets, increased recreational opportunities and above all, a heightened quality of life." City of London Cycling Plan 2005

So let's compare cycle infrastructure across the globe to see how the City compares for cycling. A selection of snaps from some recent travels. I've tried to look at how main thoroughfares differ from city to city on a couple of recent trips. 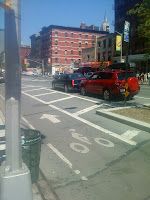 We start with New York's Third Avenue. Segregated bike track. Parked cars are kept well away from the track and other moving traffic is beyond the cars. Cars actually have to wait at a red traffic light to cut across the cycle track if they're turning left, while cycles are allowed to progress straight ahead. 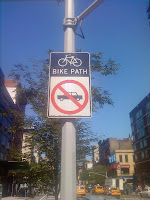 And look! A 'no cars' sign. I look forward to seeing a no cars sign in London. Lots of no cycle signs about but this would be a truly amazing sight. 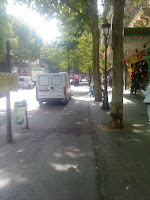 And so to Paris. A route that straddles all of central Paris from the town hall to the peripherique. Off-road all the way on a recently-installed, segregated cycle track with well-designed and easy-to-use junctions. Cycle along this at night and there will be a line of little red lights ahead of you from Velib users pedalling into the distance and very few cars on the road. 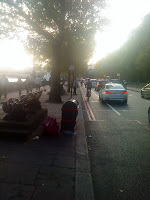 The City is the financial hub of Europe. It is a pretender to the throne of the leading places in the world to work and live. And we're certain that our City of London can out-trump New York and Paris. So let's take a peek at the City's latest high-tech bike infrastructure. We're on Victoria Embankment here and technically this is a Transport for London road so we can't criticise the City of London 100% for this one. The new bike route was installed a few weeks ago on a street that is certainly busy but by no means much busier than the examples shown in New York and Paris above. And, to be fair, it starts off well-meaning: The white line (no expense spared compared to Paris or New York here!) just about creates a space to cycle in. And cars more or less observe that segregation. Unless it's busy in which case they blatantly ignore it. But if you look carefully, you'll see our new bike lane actually emerges directly out of a carparking space. Cycles have an amazing ability to travel directly through parked cars and emerge in one piece out the front to carry on their merry way down these new cycle tracks. 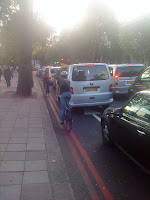 But lo! What do we have here? The same bike track as above, only a few yards further along as we head towards Westminster. And where's the magic white line? It has gone. Replaced by a sea of cars. And further along, by a sea of parked coaches too. We're straying into Westminster here so not strictly City of London.

Our capital is safe, crowned as the most advanced, the most sophisticated, the most forward-thinking environment for cycling with the best quality of living when it comes to getting around. Paris and New York know nothing similar.