Why one van sums up cycling for the next five years 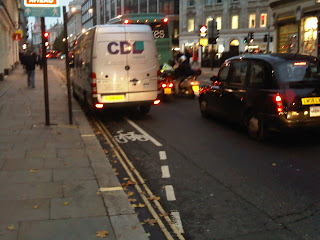 This picture speaks volumes about why cycling is hardly a mainstream activity in London.

The van parked in the advisory bike lane was there for around 10 minutes this morning. For some reason I decided to stand and watch for a while as a number of police passed it and left it alone. By my reckoning, it shouldn't be there, given the double yellow lines. And the fact that the police were conducting 'Operation Atrium' around the corner, stopping 'illegal' cycling.

But it also highlights two other issues:

The first is that I'd never realised there's plenty of space for a proper cycle lane at this point that could easily be the width of a van. That coach could still get past and it would make no difference to motor traffic whatsoever.

But instead, we have the second problem. Just look at the width of the advisory lane.

I often cycle down Cannon Street. And there are very often intercity coaches heading into the City along here. Cycle down this lane though, and you come to the Mansion House junction where you can either turn left or carry straight on.

The unwitting cyclist heading straight on will wobble down this narrow gutter space and come directly into conflict with the coaches and lorries that are turning left across his or her path.

So, we have an institutionalised left-hand lane for cycles that are going straight on and therefore have to cross right in front of the path of coaches that are, for the most part, turning left immediately next to them. Guess who's going to win.

The infrastructure is rubbish.

But is it just the infrastructure or do the rules need to change too? Coaches and motor vehicles often assume priority because they're big and because they're fast. Do we need to balance the power on our streets so that pedestrians and cyclists can claim back equal rights to the street? There's an interesting piece by Charlie Holland on his blog here about whether or not the rules about priority need to change in the UK. He could go a lot further on this topic but he has a point. There's definitely a case for proper infrastructure. But there's also a case for equalising who has priority on our streets.

Why do I think this is something to worry about? This is why:

Of particular concern in the City are pedal cycle and pedestrian KSI casualties. Both of which are unlikely to meet the 2010 casualty target. Pedal cycle casualties had been increasing since 2002 until a fall in 2007.


Which makes it all the more demotivating to read things like this coming from Peter Hendy, head of Transport for London yesterday.

He singles out the Lips – local implementation plan money – which is currently £150 million. "You can expect the Lips to decline," he says. It means less cash for boroughs to spend on encouraging cycling and walking, improving road safety and so on

What's depressing is the overall direction. In the week the government describes its new road-building plan and not a single mention of improvements to cycling or walking, we're left with non-motorised transport having to compete for a few little scraps here and there while new bypasses get built around the country in small towns so people can continue using their cars. No one ever seems to consider that if we got the infrastructure right, a lot of people would switch from car to bike. And that for a fraction of the price, we'd get just as much economic output.

What bugs me is that once upon a time, I lived in Germany. I worked in a factory in a small town in the south. And I lived in a smaller village still. Because that's all I could afford. And I cycled 10 miles to work each day. Along a segregated bike track the whole way. As did most of my colleagues. Because it made economic sense to do that. I could afford to do the job because I didn't have the money to pay for a car or a nice, more centrally-located house. And in the long run, that allowed me to save money to get myself to London.

If I'd been in an equivalent town in the UK, I'd have been forced to buy a car, I suspect. And pop would have gone my savings. And my ability to climb out of the factory would have been limited by the outgoings I needed to spend to get to work.

The government's banging on about 'get on a bus' to get to work. And it's talking about investment in infrastructure 'to develop a competitive economy through [...] investment in transport enhancements". It's just that the Treasury and Department for Transport understand transport enhancements equal bypasses and motorways. And that means transport infrastructure for 4x4s. They simply don't understand the concept that cycling could be a decent alternative for most people in most parts of the country. And could help people get to jobs cost-effectively. If the infrastructure was there. Funny how when it was Lord Tebbit's turn, the mantra was 'get on your bike' and nowadays we've evolved to 'get the bus'. Not much point getting on a bike in most of the country. The roads are too fast, too full of cars and too darn dangerous for that. Pack up now folks and buy more cars. Oh dear.

A slightly wittier review of Mr Hammond's transport plans on the LoFidelity Bike Club pages here. At least I know I'm not the only one thinking this way.