If you think designing roads "for the needs of all road-users" is just a giant con, you're going to have to help shout about it 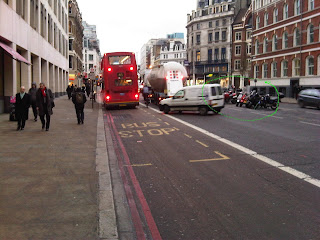 According to the City of London's transport plans for the next few years, ""Projects implemented within the cycling revolution programme will nevertheless be designed with the needs of all road users in mind."

Here's one we made earlier at Farringdon Street, heading towards Blackfriars Bridge.

As you can see, all road-users are taken into account.

Let's see what this street scene shows us.

a) A central reservation that is wider than a normal traffic lane contains parking spaces for motorbikes and taxis.
b) A bus lane that is used by bikes, buses and taxis. But is free for anyone to use outside of the bus lane hours.
c) A couple of lanes of general traffic
d) A man on a bicycle squeezing between the bus and the lorry tanker

So it ticks all the boxes. A road that takes all road users into account and doesn 't prioritise the bicycle user.

If we allow the City's politicians to vote for this policy in February, then this is what we're going to see for the next five years as well. More roads designed for all road users. I think you'll find that 99% of the road is designed for motor traffic. 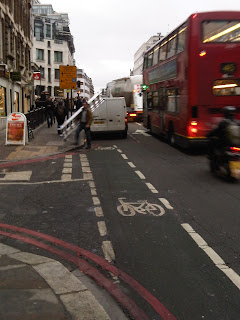 Because there is in fact, the tiniest proportion of cycle infrastructure to be seen here.

If you look carefully, you'll see an advisory bicycle lane. The lane is sort of squished into a normal traffic lane. So anyone overtaking you in that lane as you pedal along will invariably try and just squeeze past you and perceive that you're 'taking their lane'.

But what's that I see in the bike lane? A van. Parked perfectly legally in the parking space that completely blocks the advisory bike lane.

The City is planning to spend a whopping 0.45% of its transport money over the next few years on the cycle revolution. Which is just about enough to pay for some more of these advisory cycle lanes. This is what road space for all road users looks like. And this is what 0.45% looks like.

If you don't like the idea of seeing more of this sort of crap infrastructure (to borrow from freewheeler here) being built in the name of sustainable/smarter/eco travel, call it what you will, and you just want to see safer, more sensible conditions for cycling, then join us in writing to the City in January. Here's the timetable and how you can help.