Is overengineering the reason that TfL doesn't understand cycling? 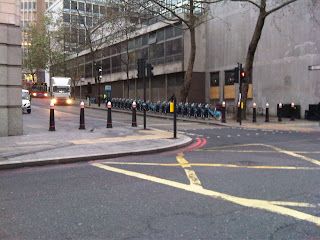 Stonecutter Street, City of London. The street heads up the hill from Farringdon Street.

It's a one-way street where it joins Farringdon St but is two way roughly from the point where you can see the lorry in this picture.

A number of people have been trying to push TfL allow cycles to turn into Stonecutter Street. If you work at Deloitte, for example (just up the hill here) and want to get to work from the north, you have to go through some circuitous back route instead of just turning right from Farringdon Street.

There's also the daft situation that if you're cycling on a hire bike, you can't legally get your bike to the docking station unless you jump off in the middle of the A-road and wheel it along the footpath.

All it would need is a drop kerb and a no turn except cycles sign. But, oh no, TfL seems to feel it must be much much more complicated. Here's the response they sent to someone who cycles in the City and forwarded it to me:

"Thank you for your email dated 11 November 2010. We are very pleased to hear about your commitment to cycling as Transport for London encourages employers to promote smarter and more active forms of travel.

Unfortunately, it became apparent that with the traffic light phasing at the junction of Farringdon Road and Stonecutter Street it would be difficult to allow cyclists to turn left or right into Stonecutter Street without either reducing the amount of time pedestrians have to cross Stonecutter Street or the capacity for general traffic on this strategic route on the Transport for London Road Network. Further modelling is required to assess how best we could provide for this, and Transport for London and the City of London will continue to work together to progress this scheme. Although we are unable to provide a firm programme at this moment in time we would hope that this could be implemented in 2011 or 2012."

Make of that what you will.