Blackfriars Bridge - Our meeting with TfL last night: Tfl is turning it into Vauxhall Bridge. A very unfair deal for cycling. 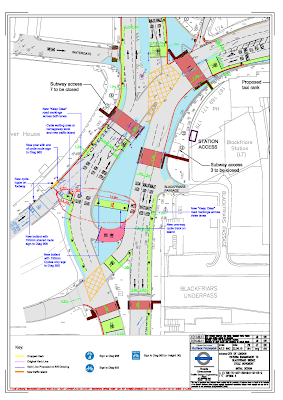 
Things seem to be moving fast on this. Please read what's happening down below. But also have a look here for the latest update on how TfL may, if we're lucky, be beginning to wake up and what you can do to help.

For now, I want to focus on what we learned about Blackfriars Bridge.

Firstly, it seems the plans are set in stone and were agreed upon last year.

So it turns out that TfL is in fact now only consulting on the right hand turn that I've highlighted inside the red circle on this plan. This was sent out to 'interested parties' on Friday and made its way to me that night with a deadline to respond by today. Fabulous.

There were two people present from TfL last night. One, a very bubbly and supportive cycling engineer. The other was the woman who is responsible for all of the trunk road network in what is essentially most of zone one - namely Westminster, the City, Lambeth, Southwark. So that would include all of the TfL bridges and basically the main roads in those areas. For reference, she has not cycled in London.

She clearly didn't want to talk about the Blackfriars scheme in general. I suspect because she thinks it's done and dusted. But she did want to talk about the new right hand turn coming off the slip road and turning south onto the bridge and which I've marked in a red circle on the map above. As I said last week, while this is nice to have, it's not hugely useful for more than a handful of people. She seemed a bit shocked to hear that.

The line that TfL was pushing last night was this:

"The new design will make it better for pedestrians. It will allow less traffic over the bridge. It is therefore good for pedestrians." (Note, this is my paraphrasing what the engineer responsible for this scheme was saying. The cycling engineer was notably quite quite silent at this point.)

She seemed quite surprised by us quoting TfL's own statistics that the biggest single group of 'traffic' on this bridge at rush hour is bicycles.

And in her view, as in the view of many people and the law of course, cycles are traffic. So, she more or less stated that the logic works like this: Bridge has lots of pedestrians therefore pedestrians have priority (which is fine) therefore all traffic needs to be secondary to pedestrians. And that's it. That is where TfL's logic just comes to a grinding halt.

She also seemed unaware just how much of a death-trap this junction is for cycling. If you hover over the junction on this map, you can see just how many cyclists have been killed or seriously injured here recently.

When we argued that this scheme is absolutely rubbish for cycling she replied that it's not because it's good for pedestrians and because it allows less traffic overall according to the models.

Who cares what the models say about traffic overall? The point is that TfL is simply not engaging with making this bridge safer for people to cycle over.

So we told her why we think this scheme is bad for cycling and bad for pedestrians. Just to recap:

I think it's bad for pedestrians because:

Although the pavement is a bit wider outside the new station entrance and over the top of the flyover, you'll no longer be able to walk between Watergate and the Black Friars pub. If you work in KPMG's offices or Unilever near Watergate, you'll have to cross in a sort of zig zag over three crossings to get to the pub and the shops. If you come out of the new station and want to get to Watergate, it'll work, however.

And frankly, this is a fairly nasty piece of road to walk around anyhow. It's going to get faster and nastier as a result of this plan. So you'll have to leg it across multiple lanes of fast-moving traffic if you want to get across anywhere other than the new crossings. Or walk along surrounded by the droan of even faster-moving motor traffic. Lovely.

I think it's bad for cycling because:

It adds extra traffic lanes which means cars will almost certainly travel much faster through the junction than they do at present. Whether or not there's a tiny bit less traffic is utterly irrelevant. If there's enough motor traffic here and it has multiple nice wide clear lanes in front of it, it will become like Vauxhall gyratory - a car-dominated race track. Try cycling through that with your 12 year old daughter on the way to visit St Paul's. Or with your dad to visit the Museum of London. Or, frankly, on your way to work on a cycle hire bike.

If you want to see what Vauxhall Bridge looks like for cycling, look at this link. Multiple lanes for motor traffic. Cycles squeezed into tiny lanes. Motor traffic completely and utterly dominates and travels at speed, very close to the majority of people on bicycles who aren't young/fit/brave enough to take a 'vehicular' approach to cycling over this bridge and stick in the insanely dangerous bike lane. It's also pretty nasty to walk over. Very narrow pavements, lots of fast cars. You feel like a fifth-class citizen if you happen to walk or cycle over this bridge.

TfL is turning Blackfriars Bridge into another Vauxhall Bridge (and by the way, it's the same team responsible for both). Great for driving across, at speed. But cyclists aren't getting a fair deal. And that's what I think it boils down to. I think that there are enough of us cycling over this bridge to demand we get a fair allocation of space on this junction.