Object to new Blackfriars Bridge scheme now. Five days to respond to insane new layout from TfL. How to let TfL know what you think 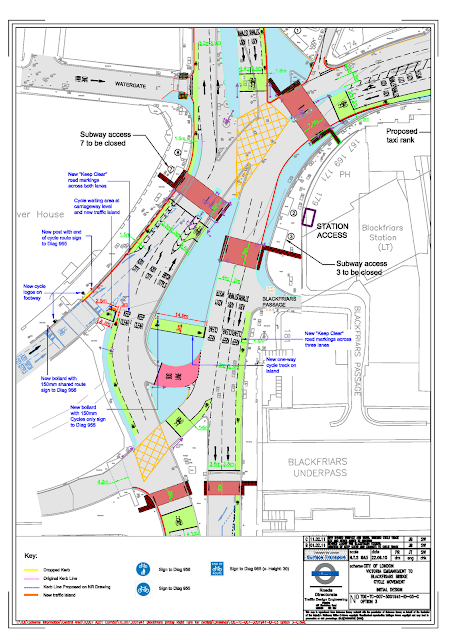 UPDATE: We met with Transport for London planners last night.

These are the plans just in from Transport for London for the north side of Blackfriars Bridge.

You can object to these plans now. And please do so quickly. All the details on who to write to are below.

Let's just remember that at rush-hour, 35.6% of the traffic heading north through this junction consists of bicycles. Cars plus taxis make up only 31.9%.

There are masses of problems with the layout. I don't know where to start. But I'd urge people to send their comments to the senior traffic design engineer for this project as soon as possible. There are internal deadlines for the project on Wednesday 23rd February.

I would like to suggest emailing Kulveer Ranger, the Mayor's advisor for transport but I can't find his details in any public forum. In all cases, please be nice to the AMs. .

Firstly, let's say you're heading north into Queen Victoria Street. At the moment, you need to cross one lane of traffic. You'll now have to cross two and get into the third lane. You'll then not be able to get to the front of the motor traffic any longer because there's a giant traffic island in the middle of the filter area.


Once you get over the bridge, there's a traffic island in the middle which narrows the carriageway but doesn't add anything to the overall road scape - the traffic island isn't going to be a pedestrian crossing any more. So why is it there at all? If you're on New Bridge Street on the other side, heading south, this traffic island just takes up space and makes the entry to the bridge so narrow that it's almost impossible to get to the bridge in the mornings. If you don't believe me, look at these pictures of what this space looks like on a typical rush hour. So why not do away with the traffic island if it's not being used as a pedestrian crossing any more (or at least remove some of the new pavement on the eastern side of the junction just by the lights) and create space for bicycles to get past the stationary traffic.

Head south into the bridge itself and the cycle lane that is there now, is gone until you get past the new station entrance. So you're in the main traffic flow. At the moment, you get your own space.

That would be fine except that heading south at the moment, there is only one lane of general traffic heading on to the bridge next to you. According to this plan, you'll now have two - basically, TfL is building motorway conditions across a bridge that has a majority of cyclists at both rush-hours. Head south and want to get on to Embankment - you'll have to charge across three lanes of traffic. It is currently only two. Which is far far easier to cross.

There's loads of space for a proper 2.5m wide cycle lane. But it's being used for cars instead. It's already proven that the single lane into the bridge works. So why make it two?

As a pedestrian, you won't be able to cross from the Blackfriars pub over to the other side of New Bridge Street any longer (at Watergate). That's an incredibly busy pedestrian crossing.

The only good addition I can see is a slightly wider cycle lane heading north over Upper Thames Street after you've crossed the bridge (but which means less pavement space for pedestrians crossing the bridge here) and a new crossing for cycles coming off the Embankment to enable them to turn right on to Blackfriars Bridge through the middle of the traffic island. Although I can't really see the point of this new crossing as hardly ever makes that manoeuvre. In any case, to access that new cycle crossing, you'll have to do a sort of right hand turn out of the right hand lane coming up the slip road on to the junction. Something I suspect most motor drivers behind you won't really understand.

My reading of this plan is that it's designed to allow cars to travel faster through the junction on more lanes. To make it less convenient for pedestrians. To make cycles part of the traffic flow, where they have to leg it across multiple lanes of relatively faster moving traffic than now.

It's going to turn something that is currently a fairly slow-paced junction where it is not impossible to get across the lanes into something that is frankly worse than it ever was before. TfL has designed an urban motorway here, it seems to me.

For a bridge where the majority of rush-hour traffic consists of bicycles not cars or taxis, this is just vandalism. I'm sorry to be so frank but it really is.

This is my initial reading of the scheme. And I'll review it in more detail over the weekend. But I'd urge as many people as possible to write to TfL now while we still have time and to get their thoughts sent in by Wednesday of next week.

By the way, if you want a better understanding of why Transport for London might be planning to turn Blackfriars Bridge into a motorway, read this article on the Crap Cycling in Waltham Forest site which explains very succinctly why TfL is just responding to the Mayor's desire to get private cars moving around London faster. And what that means for London's streets and general environment.