Vauxhall Bridge - even outside the congestion charge, cycling has more than trebled on this bridge

Looking slightly outside the City of London, here's the scene at Vauxhall Bridge at rush hour one morning last week. The view shows the five southbound lanes coming off the bridge and into the gyratory.

Vauxhall Bridge is interesting. It is one of only two zone 1 bridges that sit outside the congestion charge area. So you'd expect it to be full of motor traffic dodging around the outside of the congestion charge. And it is. It's a nasty place, full of motor vehicles at very high speeds. When I drive around this junction, it's hard not to get pushed along at up to 45 or 50mph on this gyratory.

The view above shows four lanes of cars, one lane of buses. And if you look very hard, a tiny bicycle lane. It's a horrible bicycle lane, exemplified in this excellent video showing the bridge as you head towards the junction (pictured above) by gaz545 below.

The southbound lane is ridiculously narrow. No doubt, TransportforLondon wanted to ensure that bicycles shouldn't 'restrict the traffic flow'. This is the terrifying line they are spinning about Blackfriars Bridge where they want to reinstate two new lanes of traffic and a very similarly-useless advisory cycle lane. This bike lane is frankly life-threatening. Legally, motor vehicles are not obliged to stay out of this lane because it's only an advisory space. So TfL has created a facility for cycling, which is useless in reality, in fact, positively terrifying in reality, but from a legal or public relations perspective, the facility allows TfL to claim it is taking the needs of cycling into account. More of this to follow on Blackfriars Bridge at this rate. It's depressing really.

Back to Vauxhall, though. Unless you want to use the shared use pavement/cycle facility shown in the above picture to get to the spot just under where I'm taking the picture and turn right towards Wandsworth or Clapham,you are expected to sprint across up to four lanes of fast moving traffic and stay in one of those lanes for several hundred metres, surrounded on all sides by fast-moving metal. Alternatively, if you're going straight on, you're highly likely to be hooked by a vehicle turning left. While it's nice that there's a shared use option it involves two separate crossings to go straight on and four separate crossings to turn right. By car, that would be one and two traffic lights, respectively. So it's twice as easy to travel by car. Oh, and cars get green lights for a bigger chunk of time than bikes and pedestrians. You can often wait over 2.5minutes for a single crossing to change to green as a pedestrian here, depending on the traffic light cycle.
﻿﻿﻿﻿﻿
Given the horrible nature of the bridge, it's quite a surprise to see that 20% of all vehicles crossing the bridge southbound between 5pm to 8pm are bicycles. That's up from only 6% in 1990. Cars, meanwhile are down from 69% of the traffic to 50% in the southbound rush hour. Northbound in the mornings, bicycles make up 20% of the traffic (7am to 10am) and cars only 40%.

I'm surprised only because, given the dreadful nature of the southbound cycle lane, I actually go out of my way to avoid using this bridge to cycle south. Northbound, I can cycle along in the bus lane, so I'd have expected decent cycle volumes. But it's intriguing to see the same percentage of people putting up with the abyssmal southbound lane. I'm obviously a bit of a wimp when it comes to cycling on this bridge. 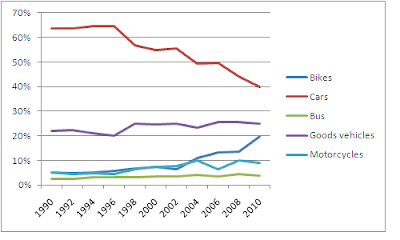 There are 2,952 private motor cars heading north in the mornings. That's compared with 1,456 bicycles.

Shown in percentage terms, something interesting is happening if you look at the trajectory of cars vs bikes. Even this dismal bridge, which lies outside the congestion charge, is heading towards a situation where there will be a greater percentage of bicycles than private cars at rush-hour. And if those trajectories are continued, it is only a couple of years before bikes might surpass cars here in the rush-hours too.

Even if bikes do outnumber cars here one day, I'll still remain terrified of manoeuvring into the right hand lane here, which is what you need to do if you want to turn towards Stockwell or Wandsworth on the gyratory. Throwing myself against four lanes of cars on a bicycle is simply not my idea of fun, I'm afraid. And that probably goes a long way to explaining why most Londoners never cycle around places like Vauxhall. And why most of them will continue to use their cars rather than trog around here on two wheels, powered by their own legs.