Sergeant Simon Seeley, from the Met's road death investigation unit, said: “Our traffic management unit has advised me that that cycle lane is not of the required width. It is not the proper width for a cycle lane.”

Seeley pointed out that: Not only was the 1.2 metre-wide cycle lane below the minimum 1.5 metre width set out in government guidelines, but the adjoining traffic lane was only 2.9 metres wide and went on to point out that the lane was only 40cm wider than the HGV that ploughed into Mr Smith killing him. 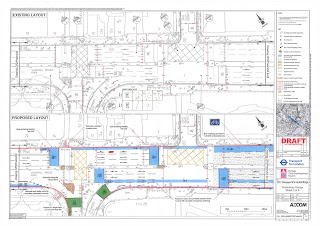 So, it's fascinating to see how Transport for London intends to resolve that issue when it redesigns the space as part of its new Victoria to Peckham Cycle Superhighway. Here it is on the left with a before and after shot. And click here to see what the area looks like.

Heading along that same direction now, the plan is that what was a 1.2m cycle lane and 2.9m adjoining lane is now a whopping 3.0m lane, with no bicycle lane. So TfL is proposing to simply make that killer lane narrower and hope that sorts things out.

Look on the other side of the street, heading southbound, and there's a deeply cynical 'wide' lane. It's a 3.9m motor vehicle lane with 1.5m of blue paint in it. In other words, if you're a bicycle, you will be expected to cycle along on the narrow strip of blue paint, which is the narrowest possible width for a bicycle lane. There will be no markings on the blue strip so it's not technically a bike lane, which gets TfL off the hook from this point: The actual motor vehicle lane will be only 2.4metres. That'll be fun when a 2.8m wide HGV is trying to get past you.
Look more closely and you can see just how cynically even that appearance of extra space has been achieved.

Head south again, towards Victoria, Mr or Mrs Cyclist, and you will now be expected to head north by cycling along in a perilous 1.5metre bike lane sandwiched between two traffic lanes, both only 3.0metres wide. 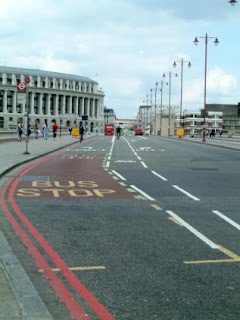 So, TfL have basically wriggled out of one dangerous and killer cycle lane by removing the cycle lane into Drummond Gate entirely. And then they've gone and installed a northbound cycle lane that is only 1.5metres wide and will force cyclists to wobble in between two lanes of fast-moving motor traffic with just 3.0 metres to play with, 10cm more than the killer lane that resulted in the death of Everton Smith.

Let's just remind ourselves what these killer middle of the road cycle lanes look like:

To the right is an image of Blackfriars Bridge heading northbound. This is the design that was in place until 2006. Two people were killed in this very cycle lane over a 14 month period.

Guess how wide this cycle lane was? 1.7metres. In other words, two people were killed in a cycle lane that ran down the middle of two fast-moving motor vehicle lanes. That lane was wider than the one TfL is planning to install on Vauxhall Bridge Road directly next to the spot where another cyclist was killed by a too-narrow cycle lane.

TfL is refusing to allocate road space to cycling. It is borrowing space from one side of the street to make the southbound side safer after a cyclist was killed there last year. It is then implementing an entirely insane cycle scheme heading northbound that directly mimics a scheme where two cyclists were killed. The cycle lane is too narrow. The motor vehicle lanes are too narrow. The motor vehicle speeds are too fast. I wouldn't cycle my niece down this. Would you?

TfL is laying out Cycle SuperHighways that bluntly refuse to allocate space to cycling. To me, this is a deeply cynical and flawed compromise that shoves two fingers up at cyclists.

What TfL should be doing is removing a lane and creating enough space for people to cycle here in safety. Instead, it is creating the illusion of bicycle facilities while protecting space and speed for motor vehicles. An illusion that we know is deathly.

Thanks TfL. As the Londonist article stated a few weeks ago: Please stop trying to kill me!

If you think this plan looks rubbish, then send your thoughts to