Last week, I spent an evening walking around Vauxhall Bridge Road and the Vauxhall gyratory with a chap from Transport for London.

One of the things that we got talking about was what people are increasingly referring to as 'ghost cycle lanes'. Here's a picture of one just south of Southwark Bridge. My view is that these lanes are death traps waiting to happen.

Look at the scene above.

The bus and the lorry behind the lights are in the 'ghost lane'. Essentially, it's a normal motor vehicle lane. But it's painted blue and has bicycle symbols on it.

I took this photo and watched as the lorry on the right of the picture overtook the chap cycling along in the ghost cycle lane (by thre traffic light in front of the bus). The lorry overtook the cyclist and turned left in front of him. If the man cycling hadn't braked, the HGV would most likely have killed him.

This happens again and again. And is a function of the ridiculous design of this junction. It's a bicycle lane filled with HGVs and buses.

That's my problem with ghost cycle lanes - they're a half-cocked excuse at not implementing a proper bike lane. And they're dangerous. Because they're neither one thing nor the other. In theory, I reckon transport planners think that each vehicle will work out how to navigate the ghost lanes safely. But in reality, as I saw at this junction, if you're big and fast, you do what you bloody well like, and screw the cyclist.

I asked my TfL host why London's transport planners couldn't allocate more space to cycling at one particular junction, namely at the cross roads at the northern end of Vauxhall Bridge here. This is a place with four lanes of traffic leading up to the lights in each direction. In other words, plenty of space to allocate space for cycling. The plans for both the Cycle Super Highways that will soon cross this junction from north to south and east to west are to implement ghost lanes. Not proper bike lanes, just a bit of blue paint.

The thing is, what that answer doesn't reveal, is that if you're not in a motor vehicle at the time, you're bottom of the pile.

Let's see what that means in reality, then. 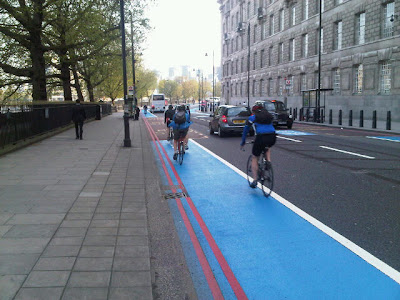 Here's the new Cycle Super Highway heading west along Millbank. It's almost shockingly impressive especially compared to what was here before which you can see here. The hatchings down the middle of the road are gone. In their place, two fairly decent bicycle lanes. Redesigning road space this way is genuinely good news for cycling. There are plenty of streets all over London that could be redesigned like this but nothing's happening. It's just this one street.
Back to Millbank, though.

Just as you get used to the nice wide cycle lane along Millbank, things go a bit pear-shaped. The same as they do at Vauxhall gyratory, TfL's Cycle Super Highways completely fail to deal with the difficult bits of your journey just when you need them.

If you carry along Millbank you soon come to the junction with Vauxhall Bridge pictured left.

The Super Highway isn't finished here yet. But when it is, it will work exactly the same way as that treacherous junction pictured at the top of this page on Southwark Bridge Road.

What happens is that the blue cycle lane disappears and instead, you get four lanes of motor traffic. If you're a cyclist heading straight on, you have to share the nearside lane with left-turning motor vehicles in your new bicycle ghost lane.

EDIT UPDATE IN NOVEMBER - It is exactly this sort of 'ghost bike lane' design that has now killed two people at Bow roundabout. And Transport for London is proposing dozens more junctions should be designed exactly like this.

In other words, your bike lane buggers off and you get to share a motor vehicle lane that happens to be blue.And you get HGVs overtaking you and cutting left in front of you, just as I saw at at the top of this article on Southwark Bridge Road. Fabulous example of an institutionalised death trap.

So, in other words, the junction will look hardly any different to how it looked today, in this picture here.

Lots and lots of bicycles, crammed into a narrow strip stuck between the pavement and the motor vehicles. And guess what? Because motor vehicles have four lanes to themselves (including what has been your cycle lane up to this junction), there's not much of a queue for motor vehicles. It's never more than a few vehicles deep. But there are upwards of 20 cyclists in this stack of bicycles, all lined up in a tiny, narrow space that will be not much different when the Super Highway is complete.

So, it seems that TfL doesn't want motor vehicles to stack. But if you're on a bicycle, tough luck mate, you'll have to make do with a mega queue of bikes in front of you. Can't make it less convenient for Londoners to drive everywhere and more convenient to cycle and walk now, can we?