TfL designs a new Cycle Superhighway at Vauxhall Bridge. Nothing's changed. It's still a motorway. And cycling is still treated with derision. 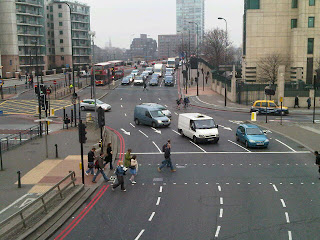 Amazing isn't it. Transport for London's first drafts of the new Cycle SuperHighway are now out. On the right is an image of the exit from Vauxhall Bridge, heading south into the gyratory. I profiled this junction a few weeks ago here in much more detail. Five lanes for motor traffic and a tiny bike lane. As you head towards the gyratory on your bike, you have to slip along on the inside of cars that are turning towards central London (where the yellow taxi is heading right in this picture). If you're heading straight on, you'll find a lot of motor vehicles travelling extremely fast and weaving in and out of lanes. Almost certainly, there will be at least one motor vehicle weaving into the paltry bike lane.

So it was with lots of excitement that I opened up the first draft of plans for the Cycle SuperHighway that will run from Victoria, through Vauxhall, Oval and on towards Peckam. I thought that TfL might realise that here's a junction with plenty of space to make things slightly safer and easier for cycling. Perhaps by removing a lane of motor traffic and slowing this junction down a little bit to make it easier to manoeuvre on a bicycle? Or by creating a space that is slightly segregated from the thundering lorries that whizz down from the bridge? 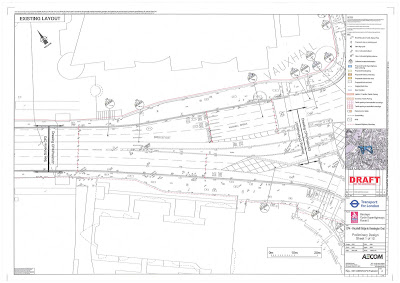 Here's a plan of how this part of the junction looks now (above). The top of the diagram shows the southbound section of the bridge shown in the distance in the picture above. You can see the four lanes of general traffic and a space between that traffic and the bus lane. you can also see the extremely narrow, advisory bike lane.

Let's have a look at Transport for London's bold vision for tackling this junction and making it how TfL intends to provide cyclists with safer, faster and more direct journeys into the city. 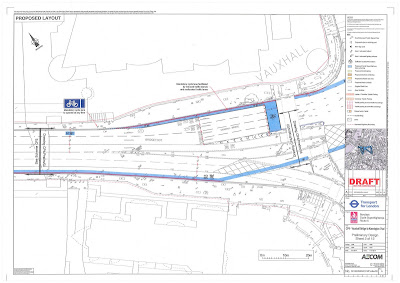 Pictured here is a diagram of what this junction will look like after its makeover into a Cycle Superhighway.

The tiny strip of advisory cycle lane is now blue. And it's a mandatory lane, ie motor vehicles may not enter.

But unless my eyes are deceiving me, it's the same lane.

It's just as perilously narrow as it is at the moment. There are still four lanes of motor traffic heading into the gyratory with you and you're still going to get swiped by fast-moving motor vehicles when you cycle on into the junction.

Unless it's me being horribly negative, all I can see here is a mandatory cycle lane that is too narrow and that leads you into multiple conflict zones with fast-moving motor traffic as you leave the bridge and try to navigate the gyratory.

Thanks for the support, TfL. If this is all you're capable of, you might as well hardly bother.

I'll be reviewing the plans chunk by chunk over the coming days. If you think this bit of the Superhighway is bad, just look at the sheer scandal of what TfL is proposing on the north side of the Bridge.

If you think these plans are rubbish, then send your thoughts and comments to