"There's more than enough money there". Is the City more interested in funding plant pots than safer streets for pedestrians and cyclists?

A few weeks ago some of us attended a public meeting of the City of London's Streets & Walkways Committee - the committee of councilmen (councillors) who recommend schemes that shape the streets of the Square Mile. Those schemes are then approved or amended by other committees but this is the starting point.

The Committee was discussing four possible amendments to its Transport Plan, following significant criticism from people who walk and cycle through the Square Mile. One criticism levelled at the City was that its target to reduce road casualties was not aggressive enough. The Committee agreed and a decision was taken to support amending the Plan so that the Square Mile should aim to reduce the total number of people injured on the City's roads to 30% below the 2004 - 2008 average by 2020 and to aim for a 50% reduction in the number of people killed or seriously injured by 2020.

The politicians in the meeting all agreed that something needed to be done to improve the City's fairly dismal road safety record. In all the other central London boroughs, pedestrian casualties have dropped far more in percentage terms over the last few years than they have in the City of London. And cyclist casualties have increased way out of proportion with other boroughs. We've profiled those changes in some detail here if you're interested.

In summary, in the 14 year period to 2008, the City's road safety performance not only fell far short of its target for 2010 but its performance was also worse than any neighbouring authority overall and in particular for walking and cycling.

What really struck me in the meeting, though, was a comment made by one City of London official: "There's more than enough money there", he said, to make a difference to the City's road safety figures. The committee heard that the issue isn't about lack of money, it's about where the money gets spent.

So, some of us have decided to get a better understanding of where the City's money is getting spent. And the results are rather surprising.

Let's start with a tiny bit of context, about something called StreetScene. StreetScene is the City of London's strategy for creating a better public realm on its streets. You can read more about it in this document here if you're interested. But in summary, the good news, is this is about spending money to make the City's street's places that 'enrich the qualities of the public realm'. In a separate document, here, you can see examples of how and where those StreetScene projects are.


So far so good. As someone who walks, cycles, drives, takes buses and the tube in the Square Mile, I like the idea of getting about in streets that are safer and nicer places to be.


But there are two catches:


Firstly, the Street Scene Manual, which is the guide for implementing Street Scene projects in the City never ever mentions cycling. It talks about making walking a 'more pleasurable experience', and I can't disagree with that, but not cycling.


And secondly, the strategy doesn't talk about making the City's roads safer, only about making it 'a more pleasurable' experience to walk around the Square Mile. Let's take one such City road, Queen Victoria Street pictured on the left here. None of the StreetScene money seems to be going into making junctions like this safer for pedestrians.You'll notice people walking down the middle of what is essentially a motorway-style slip road here. This a fairly normal sight at any time of the day at this point because the only way to walk from the Millenium Bridge to Blackfriars Station involves either legging it across this junction in the middle of the carriageway or using a grotty underpass while motor vehicles speed past on to this motorway-style slip road.


Here are a couple more examples:


To the left, the bike lane between Carter Lane and New Change, just to the south of St Paul's. Recent Street-Scening removed the road that used to be here and turned it into shared use pavement. Can you spot the bike lane? It's the tiny piece of drop kerb by that pillar, just to the left of the bus stop. What this scheme has done is to create a very pleasant walking realm (good) but it's more or less removed a route for cycling that ran parallel to St Paul's Churchyard. You'd have to be able to spot that pillar with its little blue bike lane sign to know you can cycle here. 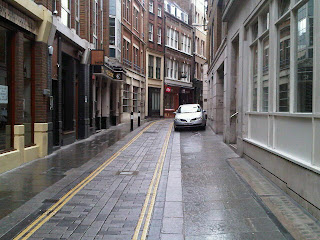 Further along, the City has spent considerable cash on paving Carter Lane, shown to the left. It looks nice. But it doesn't have any impact whatsoever on improving the safety of pedestrians and cyclists on the City's roads. Not to mention the fact that the pavement has become a de facto car park.


Let's look at just how significant this is. I am grateful to a fellow City resident for spending several nights in front of the computer screen for this data. We've looked at the minutes of every single set of minutes of the Streets and Walkways sub-committee from May 2004 to December 2010 and looked at how that Committee has allocated approximately £31million of capital expenditure in that time.


So, 64% of the City's expenditure on its streets seems to be going into StreetScene - a project that focuses exclusively on creating a better public realm for pedestrians in the form of aesthetically pleasing spaces but ignores cyclists and seems to do very little to address key junctions where most pedestrian casualties occur.

In a nutshell, my concern is that the City of London's Street & Walkways Committee has spent a lot of money  over the last few years, predominantly on nice paving and plant pots, while the City's road safety record has continued to worsen.


And I can't help but think that, were the City to spend its StreetScene budget on making its main junctions safer for pedestrians and its roads safer for cyclists, it would be a far more 'pleasurable experience' for everyone. And it's alarming that is has taken the actions of the people who have written into the City of London about it's Local Implementation Plan over recent months to make the City even consider that it might need to set proper targets for reducing road casualties.