Blackfriars. How do we make people realise this is about improving things for drivers and pedestrians, not just for cycling? 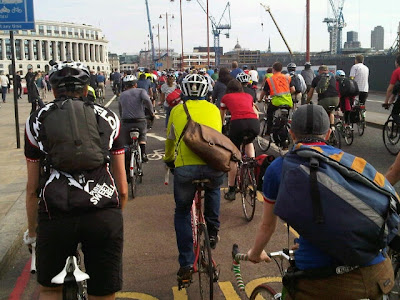 Pictured left: Blackfriars Bridge northbound this morning at 8.30 on the way to work.

Cycling over the bridge was great: No one tried to squeeze past me in their motor vehicle giving me only a few centimetres of space. I didn't have to try and cycle faster than an HGV speeding down the bridge to get into the correct lane to turn towards my office.

Some cyclists in Waltham Forest put it very well on their site yesterday: The reason hundreds of people got together this morning to cycle across the bridge isn't just about cycling.

It's about the fact the walking and cycling are shoved to the bottom of the pile by our Mayor's transport authority which favours more and more motor vehicles trying to cram their way through London. And that, as a result, people don't feel they have the option of not using their cars.

Which is why even Transport for London acknowledges that 58% of people say they would like to cycle more but don't at the moment. And it's also why people are feel they have no option but to drive around London at snail pace: 50% of journeys in outer London made by car are under two miles, more than easily cyclable. If people felt they had a choice. 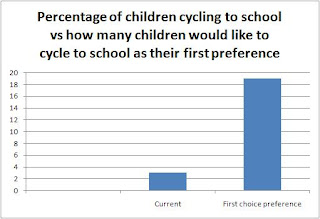 There's some fascinating data over in Southwark. They asked all the school children in 85 schools to stick up their hands and vote for their preferred way of getting to school. Only 3% of Southwark's school children get to school by bicycle. 19% said that cycling would be their first choice if they felt it was an option. 15% get driven to school, by the way.

Earlier this week a 13 year old boy was mowed down on his bicycle. A couple of months ago, it was the Station Commander of RAF Northolt killed by a van as he cycled from the airbase. It's not all about young urban males in lycra any more.

After this morning's ride to work, I feel something's started moving. But I don't feel particularly jubilant. I don't want to wind up people in their cars particularly. Or wind up people waiting for the bus. But the question I'm asking myself is how to make people realise this isn't just for the benefit of me or for the benefit of people who already cycle. I'm questioning whether (and how) we can help people realise that it's possible to have less congestion for motor drivers and make it easier for them to drive when they want to (and I speak as a motor driver) and make our streets easier to cycle and walk in at the same time, so that people feel they have a choice between whether to drive or whether to cycle. Because most people don't feel they have that choice at the moment.