I decided to take a quick spin home via the new Cycle Superhighway that is stretching its way from Millbank towards Wandsworth. This post covers the section from Vauxhall Bridge to Chelsea Bridge.

I'm not going to repeat in too much detail just how weak I think the Super Highways are when it comes to junction design. But here is what they look like. Bicycles that are going straight on are sharing a lane with left-turning motor vehicles, forcing bicycles to wobble along the inside of the motor vehicles to get to the junction and then into a conflict with motor vehicles that want to turn left. 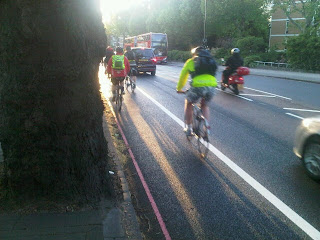 This next section isn't finished yet but I am quietly impressed with it. Here's a shot of what this road used to look like.

As you can see, the hatch markings in the middle of the road have been vastly narrowed, making space to create an obligatory cycle lane. It varies in widty but is frequently wide enough for one bicycle to pass another and still keep within the lane. Yes, it would be great to have more separation from motor vehicles, in the form of some sort of physical barrier. But it's pretty decent. And for the first time ever, I saw a few women in skirts and some older people cycling along in this new lane. In the past, whenever I've cycled or walked along here, the cycling traffic has been entirely made up of younger, faster people cycling in lycra. Admittedly, its only my first observation of the route but it's good to see normal people going about the place in this lane on their bikes. 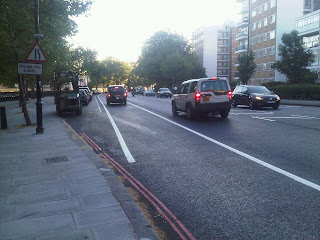 Slightly less impressive was this moment. As you can see in all the other shots, the motor vehicles stay out of the bike lane. But not this taxi. Admittedly, the full road markings haven't been laid yet. But here's a cab driver deciding the bike lane is just for him. He'd actually jumped the traffic lights and then undertook the 4x4. 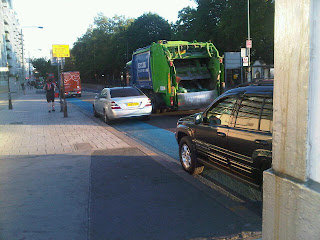 And then things go a bit pear-shaped.

Here's the scene heading south at rush-hour once you cycle over Chelsea Bridge. Some blue paint and lots of motor vehicles parked in the lane.

TfL hasn't finished the bridge yet so the markings aren't laid out properly. But it doesn't look a whole barrel of laughs from what's there at the moment. As usual, what seems to be happening is that TfL is making space for cycling where it's easy. But it's ducking out of genuinely creating safe space for cycling at the junctions where most collissions occur. And this seems usually to be the result of a fear of 'widespread traffic [by which it means motor traffic, not people on foot on on bicycles] congestion'.

Overall, some elements of good. But just when you need it, some elements of really bad. As cyclists in Sydney are finding out (and Sydney is being much more rigorous than London about creating space for cyclists away from motor vehicles), the links needs to be continuous. Not stop and start at junctions. 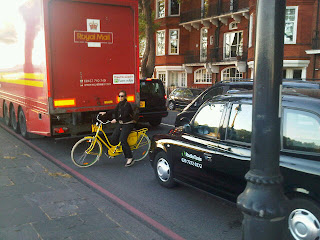 Mind you, here's a scene of what the Chelsea Embankment looks like just after the bridge, when the new cycle superhighway comes to a halt. Two lanes of motor traffic at a standstill. Hapless woman on very yellow Dutch bicycle, weaving between motor vehicles.

I'd much rather have that white line here as well keeping the cars away from me on my bicycle and push for TfL to sort out its junctions than nothing at all.