Help us get safer routes for cycling in your area

Please forgive the scrappy nature of the map below. But it's rather refreshing to see that street design in the Square Mile can get down to basics with a marker pen, a map and some arrows. Below is a plan of the City of London. The streets marked in green marker pen were made two-way for cycling over a year ago. 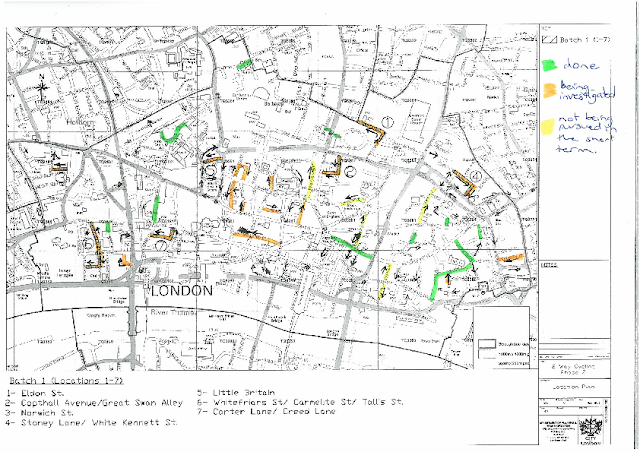 Last October, the City gave full backing to these two-way streets. They had been made two-way on a trial basis in 2009 full of doom-mongering in the press, including quotes from the AA about 'dangerous' and 'illegal' cycling. By the end of the trial, they had been proved a huge success. They allowed cyclists to avoid some dangerous junctions and have the full support of the City Police because they actually help make road conditions safer. There wasn't a single collision on the newly two-way streets during the trial period. On average, each route was seeing 60% more cycling traffic than in their previous one-way incarnation.

The City, with the clear support of City Police, concluded: "The cycle permeability improvements implemented in December 2009 have been well received with cyclists. They provide alternatives to some of the busy City Streets and make it easier and safer to navigate the City by cycle without prejudicing safety and convenience for other road users."

The City is looking for feedback on how to prioritise these streets and we'd welcome your thoughts. What I can't work out is why it's not possible to simply make entire zones two-way. So, for example, the zone north of Cheapside, bordered by London Wall, Broadgate and the Museum of London is a warren of tiny one-way streets with relatively little motor traffic. It's completely baffling on a bike. Instead of being able to use this area to avoid the main roads, for example, you end up cycling round in circles trying to find a way out. Same goes for the patch south of Fleet Street.

We'd welcome any thoughts you have in the meantime so we can put these to the City soon either in the comments or email cyclistsinthecity@gmail.com