The bulldozers move in on Saturday. This could be a turning point for cycling in the UK. Two protest rides tomorrow need your support. 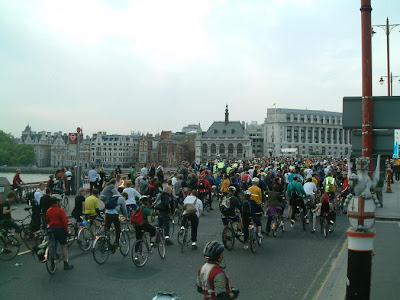 Vole O'Speed says it better than me:

"Do not worry that you may be part of a small, fringe, ragtag bunch. These protests will be huge, and consist of all types of cyclists from all walks of life. They will show how mainstream cycling has become in London, and that the authorities cannot ignore our legitimate fight for decent treatment any more. They could turn out to be a turning-point for cycling in the UK, if we all play our cards right."

This Friday there will be TWO PROTEST RIDES. PICK THE ONE THAT SUITS YOU.

Join the London Cycling Campaign on Blackfriars bridge on the south side, outside The Doggett's pub, from 6pm. I'll be there.

The LCC's demand: "TfL needs to show they have listened and tell us what they are going to do in regards to the unanimous political support and public clamour for a review of cycling provision at Blackfriars"

Or join the Critical Mass ride that will gather as normal outside the British Film Institute from 6pm, southbank underneath Waterloo Bridge. CM tends to start gathering from 6 and moves off somewhat more slowly, so might not get going till 6.45/7ish. You could fit in both rides if you're so inclined.

Here's my own rationale:

Blackfriars - despite thousands of petitions, the vote of the entire London Assembly, even with the Mayor commenting something needs to be done, TfL is going ahead with its original plan. The building work starts on Saturday.

If Jenny Jones is right, that means no cycle lanes, extra traffic lanes, none of the even tiny and hard fought for gains people thought they had won for cycling. Even the Conservatives want things to change here.

Meanwhile, over at London Bridge, it's Blackfriars 2.0. Network Rail is simply culling the route to Bermondsey. That's it. It's gone. If you live in the south east, you'll have to get off your bike and walk through the station concourse. No more bike route. One week for the folk in Southwark to try and get a protest registered with the Council. Even the Olympics is a complete farce. Here's the Olympic cycle route covered in Cyclists Dismount signs.

I cycled to work this morning, with my 15-year old cousin. She'd never ridden in London before and she's coming for work experience. We got all the way to the southern end of Blackfriars okay. One look at Blackfriars and "I'm not cycling on that".

TfL is preventing people from having a choice in how they use London's roads. In my view, it does that by designing roads that can't be used by 15 year olds on bikes. Dead simple. TfL doesn't want 15 year olds to be able to choose cycling.
We've been terribly polite. We've talked to the politicians. We've won over every one of the political parties. It's taken months and months. And nothing is going to change. If anything, TfL is even less inclined to do things that might London a city that isn't car-sick.

I'm not prone to protest. But I've had enough of TfL and its behaviour. I've tried the political approach. And I think TfL has just stuck two fingers up at the politicians as well as me.

Blackfriars isn't just about the bridge. It's about how I feel TfL ignores cycling all across London. But the Bridge itself is a focal point. And from Monday morning, you can start to say hullo to a new motorway in the middle of town.

I'll be there tomorrow night. And my beef is with Blackfriars and London Bridges. But really it's with the Mayor. For promising one thing, then letting TfL do the exact opposite. For ignoring the calls of the entire, unanimous London Assembly. And with TfL above all else for banning my cousin from using her bike.
Altenatively, join Critical Mass at 6pm starting outside the British Film Institute underneath Waterloo Bridge.