The Mayor needs to stop bumbling. Whether that's at Blackfriars or on the streets this week. Is he simply letting London get on without any real leadership?

Last week, the government and the Mayor decided to hand the London Olympic village site to a Qatari sovereign wealth fund to sell off or rent the housing built there. The Qatari bid won against a rival pitch by the Wellcome Trust to develop a large science research centre and social housing base here. As Ian Birrell reports at the Guardian, the Mayor turned down "something with potential to transform east London and provide long-term benefits for Britain" in favour of a quick buck. The Wellcome Trust decried the Mayor's decision to reject a "compelling vision for the future of the Olympic Park, going beyond bricks and mortar to focus on driving up economic growth and prosperity for the people of East London".

The Olympic village decision feels terribly familiar. I feel it links to the events of this week in London and to other policy decisions by the Mayor, such as Blackfriars Bridge.

Handing the Olympic site to what is essentially an estate agent suggests that quick money is more important to the Mayor and our politicians than a sustainable, long-term vision for the people of London. Frankly, it feels like short-term cash beat a plan that would reap its rewards slowly and carefully. Specifically it feels a decision to have 'more of the same'. More housing owned by private landlords rented out at high rates to people, no sense of pulling people together and creating opportunities for them.

It may seem a bit tangential but decisions about how the Mayor plans London's streets in places like Blackfriars feel very similar to this- all the justifications used by Transport for London and the Mayor are based on 'more of the same'. They consistently fail to talk in a language of what things could look like and promise more public spaces designed as motorways to allow more people to travel around by motor vehicles, to rush through as fast as possible.

I was thinking about Blackfriars while I was away last week on several work trips. At Blackfriars, the Mayor knows conditions aren't safe for cycling. So it's shocking to see works now going ahead that make it even less safe and much less convenient for people on foot and on cycles. On my trips last week, I remembered how I'd seen a bridge in Stockholm that links the two main islands in the centre of town.

On the left is a picture of that bridge with its bike lane. Last time I was here, the city was putting finishing touches to this new bike lane, completely separated from the motor vehicle lanes. What's happened is that the city decided to remove two lanes from motor vehicles, to create space for people walking and on cycles, kept safely away from motor vehicles. 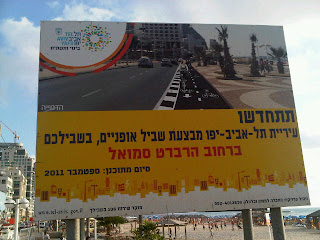 I was also in Tel Aviv last week. Not a place that might strike you as a haven of cycling. And yet look at this poster. A lane for motor vehicles is  being removed and given to create space for people on cycles. 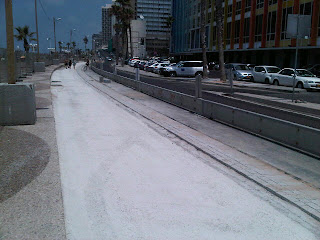 Here's a picture of the bike lane being built, stretching from the very north to the very south of the city. And completely separated from motor vehicles.


How very different from London.

My point is this. We have a Mayor who knows there's a problem at Blackfriars. He's an intelligent man. He even understands exactly what the problem is. And he's perfectly aware that other cities are solving problems like Blackfriars using radical means to change their cities. And yet he does nothing. He isn't setting a vision for what Blackfriars should look like. He's simply letting his transport authorities pursue a policy that will mean nothing really changes. More cars, basically.

And this is where I think there's a link to the Olympic village and to this week's events in London. There's no leadership from the Mayor. He's failing on both issues to set a vision of what things will look like under his leadership. Instead, I feel all we're hearing are bumbling media statements and a lack of a vision that people can follow.

Anyone who uses cycles and walks the streets in London and isn't stuck in a motor vehicle understands there are plenty of disillusioned people who hang out on London's streets. The Mayor knows there's a problem. At the Olympic site, he had one chance to make a difference to people who need alternative opportunities and to chose something radical like the Wellcome Trust bid. But he ignored that opportunity and let the culture secretary decide to opt for a quick buck. What we have is the Mayor simply opting yet again for 'more-of-the-same' without raising a finger to lead Londoners to something radical that might make a real difference to people's lives.

It's the same at Blackfriars. He knows the problem, he understands the problem. And yet I feel he choses to ignore it and let his advisors just carry on doing whatever they're already doing.

The Economist hints at the same problem. Last month it published a piece saying that "Until London decides what it wants its roads to do, Mr Johnson’s measures will only offer limited lubrication." I don't think the Mayor knows what he wants London's roads to do. That's why he's letting his transport authority carry on offering people more of the same instead of stepping in and really making things change.

I think Boris Johnson has shown a complete failure of leadership over Blackfriars. And I think he's shown a lack of leadership over events in London this week. Just as he did with phone hacking, he showed up too late and he chose to simply let the machine get on with it.


Sadly, I think the same is true for the Olympic village. And I worry the same will be true in how he handles the events of this week. I feel that the Mayor doesn't know what he wants London to be. Whether that's on matters of road and transport policy, at the Olympic village or on the streets. He's consistently failing to set a vision and to take people with him.

That's not good enough and I think either the Mayor needs to wise up fast. Or London needs to realise it deserves better.