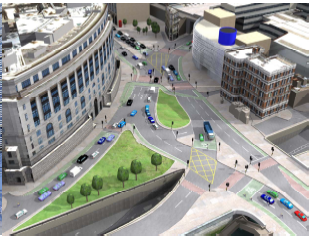 This picture shows the first image I've seen from Transport for London of the new look for Blackfriars junction.

The image was released by the London Assembly. It is part of the presentation made by Transport for London to Assembly Members to explain the designs for the new junction at Blackfriars Bridge.

I've covered some of the points raised in the presentation in previous posts. For example, how TfL keeps changing the way it defines 'traffic' using this junction to either include or exclude pedestrians.

I'm going to focus on one piece of this presentation and that is this statement:

"This junction is not atypical of other central London junctions which work successfully for cyclists."

In my view, that is exactly the point. I would agree that it is not atypical of other central London junctions. Think of Oval, Stockwell, Lancaster Gate, Stratford, Old Street.

I think what these places have in common is that they don't work successfully for cyclists. Nor for pedestrians, for that matter.


They are fast, hostile environments where the motor vehicle is king. If you want to get from A to B on a bicycle, you have to cross multiple lanes of fast-moving motor traffic. It doesn't matter that TfL claims average motor speeds at rush hour here are only 12mph. It matters that you feel you have a safe and sensible way of getting where you want to go without feeling endangered.

Interestingly, TfL now has a counter part in Manchester with similar transport dilemmas and with similar authority. Transport for Greater Manchester released some statistics this week that sing a very different tune to Transport for London. According to TfGM, "A "lack of dedicated cycle lanes", "road safety" and "poor road layouts" were highlighted as the biggest barriers to cycling in Manchester.

Transport for London's presentation is focussed almost exclusively on justifying why the Blackfriars junction needs to be designed this way. TfL doesn't once ask the question that is being asked in Manchester: will this junction be a barrier to cycling? Transport for London doesn't ask if that actually matters to people.

My view, and that shared by the thousands of people who have so far turned out to protest about this scheme (coverage of the latest demonstration here) is that people want Transport for London to remove barriers to cycling.

I commented earlier this week on a blog post by Leon Daniels, the head of London's trunk road network. Mr Daniels was telling cyclists who want to go to the Olympics that they should cycle round the A11 gyratory to get there and that this constituted a cycling route.

Since I posted that piece, plenty of people have posted comments on Mr Daniels's blog.


Here's a selection of the comments they have made:

"I am a female cyclist and I find a large number of the roads with more than one lane the scariest heart-stopping experience trying to cross them while cycling with a number of motorised vehicles behind me overtaking me at speed. There is a real problem with cycling in London at the moment for anyone with less than a Tour de France bent....are the roads just for those fit enough to ride at a speed?"

"'superhighway' 2, which is mostly just blue paint on a very busy road with heavy bus and hgv traffic, and does virtually nothing to make cycling safer or easier"

"sensible cycling policy for the olympics would have been to create safe, fast, direct family-friendly cycling routes to the olympic park from all directions..to create cycle parking at the venues themselves... tfl and the oda have failed to do either of these things. there's no reason anyone would want to negotiate heavy traffic and then walk for ages to bring their family to the olympics by bike".

I think what TfL has failed to realise is that Blackfriars is still a design that puts a massive barrier in the way for cycling. And I think it has also failed to realise is that by producing self-justificatory presentations, by sweeping under the carpet the fact that TfL was FORCED into a last-minute public consultation and the scheme would have been even worse had this not happened, they are creating a totem.

So Transport for London is absolutely right. Blackfriars is not atypical for a junction in central London in that it stands for the way in which people who walk and cycle are marginalised, made to take inconvenient routes to keep out of the way of motor traffic and, in the case of cycling, are made by TfL to play chicken with motor vehicles.

But as Transport for Greater Manchester points out "A 'lack of dedicated cycle lanes', 'road safety' and 'poor road layouts'" are massive barriers to cycling. London's no different. But, increasingly, Londoners are different. They're beginning to make clear that they don't want TfL's typical junctions any longer. And Blackfriars does not suddenly 'work successfully for cyclists' just because TfL says so. Nor do those many other not atypical junctions all across London.

There will be plenty of like-minded people politely making exactly the same point on Saturday morning at the launch of the Cycling Embassy of Great Britain. If you're so inclined, do tag along.