Cycle through Bank junction? Tell the City what you think about it 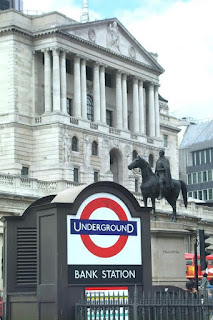 My pet hates include:

Exiting the junction into roads like Prince's Street (next to Bank of England) is nasty. It's narrow, there are usually a couple of very impatient buses and taxis trying to beat you there

Some of the manoeuvres are just plain horrible. There are traffic flows in every direction and you're stuck there on a bicycle trying not to get hit by buses, HGVs, taxis.

And, finally, it is often very difficult to actually get to the junction on a bicycle. At rush hour, queues of motor traffic take up so much space you have to either whizz round the outside of the motor traffic on the opposite side of the road or get off and push.

All in all - nasty place, designed around motor vehicles above all else. It's rubbish to cross as a pedestrian (Cheapside to Royal Exchange involves crossing FIVE roads and waiting forever), it's dangerous for cycling and is one of the most dangerous places in the City. This map here shows all collisions with pedestrians and cyclists to 2007.

The City of London sent me an email over the weekend. It wants feedback on the junction from cyclists, pedestrians and other people who use the space. There's an online form. It takes 2 minutes to fill out.

Turn Bank junction into something like Times Square, New York. This idea was first floated on twitter. Essentially, Times Square was remodelled, with bike lanes and pedestrian areas taking the place of some of the roads. And it's about to get another update, with yet more motor traffic diverted away from it. Perfect.

Private motor traffic should be diverted away from the junction as much as possible. Something rather like they've done in this town in the Netherlands:

"These used to be the busiest streets in Assen for motor vehicles. However, they were redesigned...preventing motor vehicles using it as a through route. Drivers now have to take the streets in yellow, which are optimized for driving and which have traffic lights on them. The cycle route is more direct and doesn't have delays caused by traffic lights, but drivers can't use it because for them it is no longer a through route."

Works for pedestrians by makingt the streets calmer, easy to cross and brings some life back to an otherwise nasty place. Works for dirvers by giving them a route that is sufficiently useful. Works for cyclists by giving them safer routes that they can actually access. But you have to actually force private motor vehicles to take another route. Thus far, the City has been shy of doing that. If you look at Cheapside, which is a feeder road into Bank junction, the concept was to make Cheapside 'greatly benefit cyclists and pedestrians'.
Private motor vehicles would be 'encouraged' to avoid Cheapside. In reality, all that's happened is it's even worse for cycling. There's just as much motor traffic as there was before but now the road is narrower, so you get 'buzzed' by HGVs and buses (like the chap on his bike in this picture). Or you get stuck behind a queue of motor vehicles going nowhere, taking up the whole street and unable to access the traffic lights. Even on Queen Victoria Street, which is wide enough for 2 x bus lane, 2 x proper cycle track and motor vehicles lanes, the road is designed so you're basically stuck on your tod between two buses at rush hour. Completely motor-centric design.

I'd urge you to spend two minutes filling out the questionnaire linked below:


We would like views from all users of the area, whether you walk, cycle, take the bus, or drive through Bank. Your comments will be used to focus the direction of the emerging strategy to help improve the area for you."

Choose how to respond:

> Leave your comments and upload your photos and videos at www.bankarea.co.uk

> email your comments to bankarea@cityoflondon.gov.uk

Comments to be received by 28th November 2011