This video shows the cycle route to the Olympics from start to finish. Bear in mind, this looks like a Sunday when the bus lane is in operation (only six hours a day) and that on most days the road is considerably busier than this. Mid-week or outside the bus lane times (ie most of the time), both lanes are packed with motor traffic, parked cars, a lot of HGVs. Most of the time you're not protected by a bus lane in any case and the Super Highway is just some blue paint. There are some massive junctions on this route with no space given to cycling. Especially towards the end of the video, you can see just how much spare space there is to create a safe junction for people on bikes at Bow. At the London Cycling Campaign AGM last night the people who met with Transport for London officials to survey the route when it was planned said that Transport for London had agreed then and there to build radically safer space for cyclists to get through these junctions. For some reason, TfL then chose not to implement those designs and built something on the cheap instead. No-one really knows why.

Leon Daniels, the man who is in charge of London's roads thinks this is the way that families and visitors should travel to the Olympics. On his blog, he quotes information that has been parroted elsewhere by Transport for London: "One of my correspondents stated recently that there is no provision for cyclists at the Olympic Games. This is not true!"

The best definition I have seen of the route to the Olympics is by a woman who cycles the route regularly: "If I were either the Mayor of London or Barclays, I would be absolutely furious, utterly livid, at what is being done to cyclists in my name."

Let's just be clear, this is a route that has killed two people on their bikes in the last few weeks.

This isn't rocket science. As the London Cycling Campaign points out, there are two main routes for people to get to and from the Olympics by bicycle:

One option is along the Cycle Super Highway pictured left, underneath the left turning lorry. There is masses of space here for alternative solutions - for a bike route that isn't shared with lorries for example. It wouldn't even require the removal of any road space from motor vehicles (and by the way, this identical design with an identical left hand turn for lorries is about to be installed on Vauxhall gyratory)

The other option is to head over the flyover, pictured left.

As the London Cycling Campaign makes very clear, in a civilised city, neither of these options is acceptable.

The Cycle Super Highway scheme that has been  implemented here by Transport for London is killing people. The situation is so bad that TfL director Ben Plowden has promised to look "very closely" at the cycling superhighway which ran through the Bow Roundabout.

He also said cyclists would be advised to avoid the route, which runs to the Olympic Park, during next year's Games.


The thing is, the only other routes which avoid it are shut for the Olympic works.

Frankly, it's a bloody disgrace. The Olympics are meant to leave a legacy to London. Transport for London could have built a proper, wide, safe cycle route along this road. There is tonnes and tonnes of space to do that. But it chose not to. I feel it chose to build a bike lane on the cheap so as not to interfere with its agenda of 'smoothing traffic flow' for motor vehicles.

Let's just put that in perspective. Here is another video from a cyclist going around Bow roundabout.

As he points out on his blog: "Does it look and feel like 30mph? No. The slip roads are very wide, the entrances and exits on the roundabout are designed for high speed.
Can you imagine anyone unable to walk quickly being able to negotiate this junction on foot? Or indeed would anyone cycle on this other than the battle-hardened?

The fundamental problem is that TfL et al. want us to cycle and walk more - but are not prepared to compromise traffic flow in order to help us do this." 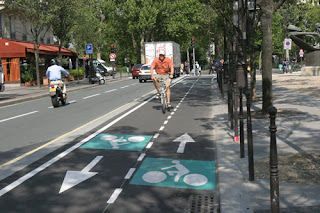 Paris has an entire cycle network that criss-crosses the entire city from end to end. It looks like this.

One bigger routes, the cycle paths are significantly wider. I'm not saying London cycle paths should look identical to this. And Paris is not cycling perfection. But it's building a hguely different cycle and street culture to London. Paris has built something that says this-is-designed-for-safe-easy-cycling all over it. London's Cycle Super Highways say this-is-designed-for-cars-and-you-cyclists-can-just-fit-in-and-try-not-to-get-killed.

Paris was a contender for the Olympics. Do you think you would have been able to cycle safely to a Paris Olympics?

I think I'd much rather take my car to the Olympics in London thanks.

What you've built out to Bow, Boris Johnson, is a national disgrace. It should have been built properly and you should have made sure of that.

If you want to see a blistering review of just how much space there is for cycle infrastructure and just how TfL has completely and utterly ballsed it up, have a look at this blog as well.  For a more measured and balanced view from the excellent local diamondgeezer blog, see this piece.
-----

There will be vigil this Friday at Bow roundabout in memory of the two cyclists killed there in recent weeks. Click here for more information.

The London Cycling Campaign is petitioning the Mayor to sort Bow junction properly. It takes 20 seconds to send your petition. Click here for more details.