Richard Tracey, Conservative member of the London Assembly was one of several London politicians asking Transport for London about cycling safety last week.

His contribution to the discussion was to ask Leon Daniels, head of surface transport - the man responsible for London's roads - this one question about the roundabout pictured above.

"It has already been touched on by colleagues about the relative safety of the pedestrians, and indeed young mothers and fathers pushing buggies, against those of cyclists. I have actually got one case on Cycle Superhighway 8 in my constituency where the flow of cycles going both ways, north and south, are on a pavement which really leaves very little space for pedestrians. In a situation like that - it has been put in and it is proving to be really very hazardous - is there some opportunity to change that? Do you come back and review the thing and can you change it? Can I give some hope to my residents that that will actually be changed to make it safe for them to walk there?"

I don't think he's wrong to ask the question. And he's actually correct about the narrow width of the pavement. But I do think the man has an obsession with this one issue. I have seen a lot of Richard Tracey's correspondence wtih 'his' residents. Every single time, he brings up the same issue.

The bigger point, though, is this: The roundabout in question is pictured above. It is the end of Prince of Wales Drive. Mr Tracey is so upset about the design of the Cycle Super highway on this roundabout that he has asked Leon Daniels specifically to trog out and come and see it for himself.

What I find astonishing is that Mr Tracey seems not to realise the Cycle Super Highway has changed absolutely nothing at this roundabout. The same ludicrously dangerous cycle lane has been there for well over a decade. All that's changed is the colour on the cycle track. You can see the earlier track in the google maps image above.

The issue at this roundabout is that the cycle track is completely and utterly useless. It is dangerous for pedestrians. It is extremely dangerous for cyclists. And drivers don't understand it either.

To get from Chelsea Bridge to Prince of Wales Drive using the Cycle Super Highway by bicycle you would need to cross several roads, giving way six separate times to motor traffic. The motor traffic is either queuing to get on the roundabout which means you can't physically get yourself across the road anyhow or it is speeding off the roundabout which makes it pretty dangerous to cycle directly in front of the motor traffic on to the cycle lane. As a pedestrian you face exactly the same issues. There should be proper zebra crossings here to enable pedestrians, cyclists and children to get to and from the park and around the Super Highway in safety. 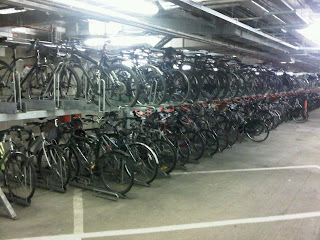 He also misses the point in correspondence with one of 'his' residents when he says: "For the vast majority of cyclists the decision to do so is informed by a simple cost benefit analysis. Cycling to work is cheaper than any other option bar walking, it will often be quicker than the alternatives and it has the benefit of being fantastic exercise"

Pictured left, the 'car park' of a major City of London employer. Do you think these cyclists did a simple cost benefit analysis and chose to cycle because it is cheaper than walking, Mr Tracey? No, I thought not. I think you need to take a proper look at your prejudices, maybe look at some of the very solid research that Transport for London produces about who cycles in London, and then update your opinions based on fact.

Something else Mr Tracey came up with recently at an event hosted by Sustrans:

"I don’t see that smoothing the traffic should clash with cycling. Quite frankly, the point of roads is to be able to get from A to B, whether you’re on a bike, or on a bus, or in a private motorcar, or in a taxi. So it is our duty as government to make sure that there is a smooth flow – and of course cyclists are a part of that.”

What pedestrians and cyclists both need as this junction (assuming the current road design remains) is one of these. A sodding great sign, now seen all over cities in America.

But no. Instead of fighting for something that would benefit pedestrians, benefit children, benefit parents AND benefit cyclists, you are stirring up a phoney war between pedestrians and cyclists and basing your views on out-of -date prejudices about who these cyclists are. I think you'll find that an awful lot of those cyclists actually are the same people who are walking their children to the park at the weekends.

The real issue here, Mr Tracey, is that Transport for London is prioritising motor traffic flow over pedestrians and cyclists. What should happen here is: a) build zebra crossings so people (especially children) can get to and from the park safely on foot and on bike b) take a little bit of space away from the 3.5 lanes of motor traffic around the roundabout so there is enough room for everyone.

And let's leave aside the fact that in your statement at the Sustrans event you claim a duty as part of the government. You're part of the London Assembly, Mr Tracey, not the government. And 'your' residents, as you describe them, deserve better of you when it comes to the roads and their safety. On foot and on bicycle.