I received an email early this week from the City of London asking for comments on a proposed experimental cycle scheme, that would allow cyclists coming from Holborn Circus to access a fairly direct east-west route from St Paul's gyratory towards Moorgate or the north of Bank. What's neat about it is that it opens up a parallel route to Cheapside that would allow people to avoid Bank junction and cycle to the north of the Bank before carrying on east-wards. I've drawn the new route in the map above (thank you bikeroutetoaster.com)


If you're not too familiar with the area, here's a link to the google map.

You'd cycle through the bus/taxi/bike-only Angel Street which skirts the north side of the BT building at St Paul's, hop on to the extremely wide pavement via a new dropped kerb, head north for a few metres and then into Gresham Street.


So, on the positive side, a cheap, quick win for cyclists that opens up a new west-to-east route that avoids Bank junction.


However, there's a number of negatives in my view. I'd be very grateful if other people familiar with these junctions could add their thoughts and comments by emailing either me directly at Cyclistsinthecity@gmail.com or commenting below.

Pictured below is a detailed technical drawing of the link as planned. Basically, by opening up the pavement area to cycling, the City can fill a missing link for cyclists who want to head from the St Paul's gyratory into the quieter streets north of Cheapside. Importantly this allows you to avoid Bank junction which is often extremely clogged up and is the scene of more car-on-bike collisions than any other junction in the Square Mile. 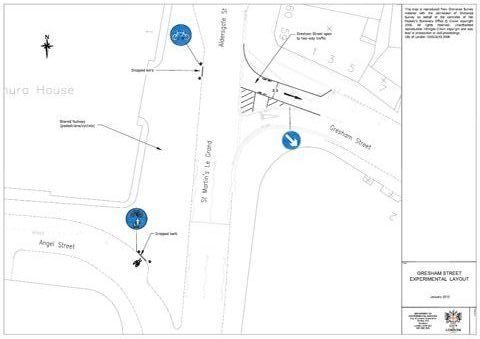 Here are some issues that stand out to me:


What's slightly irksome about this experimental scheme is that it sort of matches the City's recent and very positive rhetoric about cycling. But then undermines it completely. The City of London published its local transport plan last week. In the plan, it states its intention to:

"The continued creation of more pedestrian and cyclist shared routes and more pedestrian zones that permit access for cyclists, i.e., the selective exclusion of motor vehicles from some local access streets, at all times or only at some times of day."

This scheme is definitely a case where the City is adding new and meaningful access for cyclists. Good.

But it's failing to exclude or limit the number of motor vehicles in this particular local access street. Bad.

It's also debatable whether this is a 'quality' cycle route (something else in the City's recent rhetoric. After all, it's not at all clear whether people will even realise this is a legitimate bike route or not, there doesn't look to be any signposting, any obvious markers that tell you where to go. I know my way around the City's back streets but plenty of other people wouldn't have a clue where this heads to.


The cycle crossing needs more detailed thinking about to make it a) findable b) safer c) clear what you're supposed to do and where you're supposed to go when you're perched on your bike on the pavement.
As I mentioned earlier in this post, this scheme is experimental. But I fear it means Gresham Street will switch permanently from being a quiet local access road with one-way for motor vehicles (two way for bikes) to a busy two-way rat-run.

If this experiment were ultimately to lead to a proper, clearly-marked cycle track (one that also lead north of here so that you could come west along Gresham Street and then head north towards Islington), then great.

But there's no indication whether or not that's part of the plan yet.

So, on the plus side, hooray, the City of London is looking at ways to give more people better options for cycling through the City. On the negative side, err, it means shared space on the pavement and shared space in Gresham Street which will no longer be a local access road but becomes a rat run instead. However, if this is the start of a proper cycle track that allows you to enter and exit Gresham Street in either direction and becomes something that people want to use as an alternative bike route and want to make better over the next year or two (more money to be found for that), then it's a good start. What do you think?

Do send me your thoughts to cyclistsinthecity@gmail.com or comment below email subject 'Gresham Street Consultation' by 29 January please.