If you're a Londoner, you pay directly for London's roads. Yet if you’re a Londoner who cycles, you don't have much of a place at the Mayor’s table. Sign up and help send a message that cycling wants its place at that table. 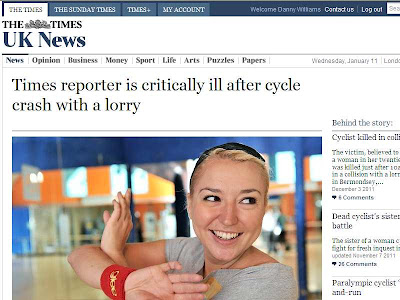 Yesterday I spoke with a friend of mine. He is a colleague of Mary Bowers, knocked from her bicycle by an HGV in Wapping late last year. From what I understand, Mary is not in a good way. And I don't mean she has a broken leg. It's far, far worse.

Meanwhile, early this week, another HGV collided with a man cycling near Victoria. The HGV driver was working for Crossrail. Crossrail has taken cycling awareness seriously and makes sure its HGV drivers are fully trained.

Boris Johnson's solution to these sorts of things is this: "The answer is very often to educate HGV (heavy goods vehicle) drivers and cyclists." But you see, these people are trained. And still they maim and kill.

I don't blame HGV drivers. I do think there's something very wrong about the fact that HGV drivers are paid according to how quickly they make their deliveries. It's the same with minicabs. Flat fare equals fast driving equals higher road deaths. So I think the Mayor may have a point in asking Transport for London for an 'independent review of the design, operation and driving of construction industry vehicles'.

But this really isn't enough.

As the Dutch road safety institute points out to English-speakers: ""The ultimate solution for the blind spot problem is a structural separation of trucks and cyclists." It is the solution that New York has opted for, that Paris has opted for, that Copenhagen applies, Amsterdam, Berlin...the list goes on. But not London.

We are seeing some signs of change over at Bow roundabout. But in general, Boris Johnson doesn't seem to believe that structural separation is the way to go. Back in 2009, he stated very clearly: "road space restrictions on London's roads preclude the possibility of segregated provision for cyclists in many cases"

The thing is, it's not true. There is plenty of space. But if you make your priority the "smooth flow of traffic", that means as much room as possible for cars, and forget about bikes, pedestrians, old people, disabled people, children and their safety. We just eat the crumbs left by the juggernauts.

A piece in this week's Local Tranport Today (a thrilling read normally) spells it out exactly right: "Cyclists' inclusion in carriageway design should start from the basis of expecting equal rights to personal safety for all road users. If this has an effect on other users then that must be accepted". The comment is spot-on, in my opinion. And it's particularly important that the people who design our roads start to see and think about this sort of message.

Now, what strikes me about London is that when you look at your council tax bill, you notice a good chunk of your taxes go directly into paying the Mayor and Transport for London. In other words, if you're a Londoner, you pay for these roads and the people who plan them not only through your income taxes but also more directly through the additional council taxes you pay straight to the Mayor.

Londoners on bikes are paying for road and transport infrastructure no less than car drivers or tube and rail commuters. It is time we demand a real seat at the table where priorities are set and where the social contract for transport is hammered out.

The Guardian's Peter Walker spotted this last week when he said: "This is significant enough to make the treatment of cyclists – something I've never heard mentioned in the national political debate – a genuine issue in the upcoming mayoral election." Exactly right.

And that's why I'd encourage you to sign up to Londoners on Bikes. It's a test site at the moment that will launch properly in February, but you can take a look at the soft launch and can sign up for email alerts. The point behind this site is very simple:

On the 3rd May 2012 we Londoners choose a new Mayor. Transport is the one thing the Mayor really controls:

"We believe Londoners on bikes have the potential to make a significant political impact by coming together as a block vote - the cycling vote. We want to make the Mayoral candidates take our concerns seriously and make electoral commitments to a safer future for London cyclists."

This isn't party political. It's not 'anti-Boris' or 'pro-Ken' or pro-Green or pro LibDem. It applies equally to any Mayoral candidate. But it is about making cycling a political issue. One that won't go away.

As I said, the site is still in development. But go, take a look and add your name via twitter, facebook or email. I think these folk are up to something very interesting indeed and I look forward to seeing how this develops.

And if, like me, this is something that really bothers you day in, day out, then do offer to support and help spread the word. It's time that people found a voice to lobby politically. After all, there are enough lobbies ranged against safe, practical bicycling.