'Cycling has risen up the political agenda'. Yes. But ministers need to do more than send a nice letter to council leaders. Come and show politicians you want them to do more. Saturday April 28th. Please join me & 10,000 other people at #thebigride London 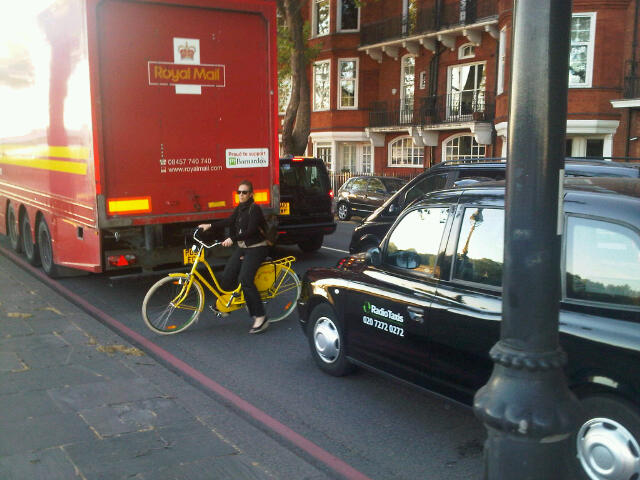 The government wants councils to look to London for leadership on cycling. We might have nice yellow bikes. But this woman has just given up on trying to cycle here. This needs to change.

According to today's edition of The Times, "Norman Baker, Transport Minister, and Mike Penning, Road Safety Minister, have sent a letter to every council leader or chief executive asking them to make the changes. “Cycling has risen up the political agenda in recent weeks, not least due to the excellent campaign run by The Times, and we are keen to seize the moment to make good progress on a number of fronts,” they write." You can read that letter in full here.

As it happens, ministers, cycling has been rising up the political agenda for more than a few weeks. For some reason, the UK is packed with people blogging and campaigning on cycling issues. There's something odd about cycling in the UK and the fact that it needs to be a political issue in the first place. If you look for blogs about cycling in Germany or the Netherlands, you don't find all that much to read about. Yet, look for blogs about cycling in the UK and there are loads of us writing about local government, about national government, about crap cycle lanes, about lousy infrastructure. None of us started out to be 'campaigners' or to be 'political' per se. But I think (I hope no-one takes issue with me on this), most of the bloggers and other commentators on cycling in the UK would agree with this editorial in The Times last Thursday, when the Times said this of its #cyclesafe campaign: "Success would not be a dip in statistics, and a few stretches of road painted blue. It would be a fundamental change in the popular expectation of how British cities ought to look." Absolutely spot-on.


The Guardian backed up comments by The Times. It described the mentality of UK transport policy which says: "roads are for getting cars from A to B as quickly as possible and everyone else can fend for themselves".

I think what is happening is that people are increasingly saying, 'No! Roads are not just for getting cars from A to B as quickly as possible'. The issue is that people want alternatives. They want to cycle safely. They also want walking to be more convenient (not three minutes for the pedestrian crossing lights to change. Or worse, for the pedestrian crossings to be removed as part of a policy to speed up motor traffic, as is happening in London at the moment).

The Times editorial last week set the standard. The newspaper said that: 'MPs should press the Department for Transport to build new cycle paths, to address the issue of trucks that kill and push new city authorities to appoint people to take responsibility.'

What we have instead is the Ministers who work in the Department of Transport washing their hands of it and saying it's all up to local councils to sort out. Oh, and they should do this by seeking sponsorship for bike lanes. In other words, not our problem, says the DfT. And so I believe that several other commentators are right to point out that they are less than optimistic about the government's response. Cycalogical wrote a very good piece along those lines here.


In that context, I think it's time to show Ministers that this is a really, really big deal for a lot of people. And that these issues aren't going away. It's a problem that's going to get bigger and louder.


Last year, Mark of ibikelondon blog and I worked with several volunteers in London Cycling Campaign to organise a series of Flashrides at Blackfriars Bridge. These rides saw over 2,500 come together with only a couple of days' notice each time to protest at the way London's Mayor has designed them out of one of the busiest bicycle bridges in London (36% of rush hour traffic on Blackfriars Bridge is people on bikes). If politicians can ignore people on bikes at a place like Blackfriars, they will have no qualms ignoring people on bikes elsewhere in London and the rest of the UK (notable that in Scotland and Wales, where power is devolved, things are taking a different direction). For those of us in England dealing with the UK parliament, things aren't looking too positive yet.


So, I think it's time to show there are more than a couple of thousand of us. On Saturday April 28th, the London Cycling Campaign is organising The Big Ride (twitter #thebigride).


The Big Ride aims to be the biggest mass participation bicycle ride in the UK ever. I hope that we can gather over 10,000 people to this ride. I'm going to invite everyone I can think of, my friends and my family, to join and to make it a really fun day for everyone. The ride is a week before London's Mayoral elections and it's about sending a message to the Mayor and to all UK politicians that cycling is here to stay.

The London Cycling Campaign has released details about the ride on its website here today.

I'd urge you to join me and 10,000 other people to push for cycling to be taken seriously in our streets and on our roads. And that, Messrs Penning and Baker, means you need to do more than send a nice letter to council leaders. It means you need to actually deliver this yourselves.

I'm planning to join one of the feeder rides to #thebigride and asking my friends and family to join me on that feeder so they don't feel threatened by cycling in London (most of them can and do cycle but most of them won't cycle in London though). I'll have more details on that soon. You're all welcome to join whichever feeder ride suits you.

By the way, if you have thoughts and ideas about what government ministers should be doing for cycling (other than writing polite letters shoving responsibility on local councils), please let me know. I'm very interested to explore some of these ideas.