Labour's cycling summit at the House of Commons - incredible level of consensus from all sorts of industries. Of particular interest, the fact that British Cycling seems to be taking concerted steps to support people making everyday trips on bikes. It's not just about Olympic athletes any more. Good. 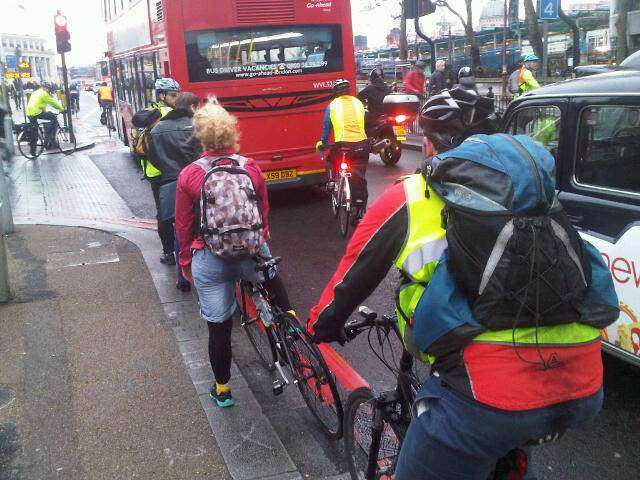 The reality of cycling in London. It really shouldn't have to look like this


Maria Eagle (Labour, Shadow Secretary of State for Transport today hosted a Cycling Summit at the House of Commons. I was impressed that the summit was taking place so promptly in light of The Times's on-going #cyclesafe campaign.

Several Labour councillors attended from around England, including Bristol, York and - closer to home - Hackney. The event was chaired by Ben Bradshaw (Exeter) and other Labour MPs Meg Hillier (Hackney) and Ian Austin (Dudley) both pitched up

No surprises so far.


What struck me was that none of the Labour politicians seemed to be grandstanding their party. In actual fact, the politicians spent the vast majority of the time just listening. When they did talk, it was about making it safer, easier and, frankly, normal to use a bicycle and stressing that this should not be a party-political issue. I agree.

The entire summit felt astonishingly consensual. Representatives from the freight industry, the AA and the construction industry added real value to the discussion and there was significant overlap with many of the comments being made by representatives of the cycling community. The only statement I took issue with was one by the AA who talked about 'roads for living in and roads for movement'. I kind of understood where he was coming from but, in my experience, roads are for people to move, not just people in cars. My sense was that the AA man's world view implied a town of quiet cul de sacs where people live and massive 'roads for movement' in between those quiet streets. That, of course, would deny people the chance to move from the quiet patch where they live to the quiet patch where friends or family live without getting in a car. Not a vision I, or many other people, share.

The one cycling group that really stood out at the summit was British Cycling, which released a statement today calling for tougher sentencing in cases where cyclists are killed and injured on the road. Martin Gibbs, British Cycling's Policy & Legal Affairs director talked about how feeble sentencing "send[s] the wrong message about how we as a society value human life and the rights of people to safely cycle in an environment of mutual respect.” The organisation went a step further and said 'Light sentences for drivers undermine confidence in the justice system'.

I think British Cycling's statement that light sentencing undermines confidence in the justice system is spot on.

The night before last, I was sat in a meeting with some senior police officers who explained to the room why it is difficult to stop people from jumping red lights if they're driving a car but easy to stop someone if they're on a bike. The room acknowledged that people jump red lights. Drivers and cyclists. But it's only the cyclists that get talked about, abused in newspaper columns and generally denigrated. Jump a red light in your car and you'll get off fine, mate. And you certainly won't get pilloried in the media, in the way you would if you were on a bike.

The topics at Labour's summit went much wider than policing and the justice system. There was a sense (shared by pretty much everyone) of a need to better legitimise cycling and to build the infrastructure both on the ground and in the legal and policing frameworks to support that.

I'm pleased British Cycling is picking up on these themes. I dimly remember that British Cycling was involved the first (and only) time I signed up for a 'Skyride' - the one day of the year that the Mayor of London shuts a few roads so that Londoners can use them to cycle on without fear of aggressive motor traffic. I remember at the time thinking it seemed a bit strange that a sporting organisation like British Cycling was branding a Skyride - all hiviz, helmets and families wobbling about in central London.

And it only really permeated through my (sometimes slow) brain today why British Cycling represents something important. Cast your mind back a few weeks to this:

"I certainly wouldn’t fancy riding across Vauxhall Cross or Elephant and Castle in rush hour, and those are only two examples. If we want more people to ride their bikes, we can’t have parts of the city where cyclists feel like they are taking a big risk just crossing a junction — it just shouldn’t be that way."

"Elephant & Castle ..is fine. If you keep your wits about you, Elephant & Castle is perfectly negotiable. I want people to feel confident. The cycle superhighways are about building confidence."

It might not look like it, but can this man
help my young niece cycle to school? Maybe....

I can't help but wonder if British Cycling and Nicole Cooke in particular were more than fully aware of Boris Johnson's foolish and blase attitudes to safer cycling and whether her comments about Elephant & Castle were a deliberate but polite rebuttal of the Mayor's stance on the safety of Londoners on bicycles. What Cooke was saying (and by extension, British Cycling) is that even Olympic cyclists think places like Elephant & Castle junction are not safe or sensible places for cycling. In other words, Boris Johnson, if you want a 'cycling revolution', it's not good enough to simply tell people to fling themselves around the Elephant roundabout (my words, not British Cycling's of course).

I also noticed this: British Cycling President Brian Cookson last week wrote an open letter to 2012 mayoral candidates, urging them to put cycling high on the priority list of sustainable transport planning. Here was British Cycling, the home of full-facial helmets and skin suits getting behind the London Cycling Campaign's Love London Go Dutch campaign. Go Dutch! implies (to me at least) hopping on your bike in normal clothes, using your bicycle to do utterly normal things.I browsed around a bit more and then discovered British Cycling is recruiting for a campaigns manager, specifically to 'mobilise member, public and political support for action at a national and local Government level to achieve the desired changes to legislation and the cycling environment.' (By the way, if you're interested in the job, you can find out more here) I think it can only be good to have more voices putting real money behind these issues.

Don't get me wrong, I think the London Cycling Campaign is doing amazing things again these days (I think it lost its way a few years ago, to be honest). But for the bicycle to gain legitimacy, we're going to have to do both the traditional campaigning stuff and also start to move beyond it with different voices that don't come from such a campaigning background. And all of those voices are going to have to work out how to sing from a fairly similar hymn sheet. In summary, I see a lot of sense in British Cycling having a growing voice. I'd never really put two and two together before but watching British Cycling in action today, I realised that their presence is a very useful step in the journey of cycling in the UK from campaign mode to normal, everyday, boring, just-get-on-a-bicycle-and-go-to-the-shops mode. I think that's probably a good thing.