Minicabs claim 'discrimination' to seize access to London's bus lanes. Addison Lee says its minicabs deserve "quicker journeys" than everyone else. I think the 'discrimination' is against bikes, walking and bus users in favour of more space for more & faster car journeys. Come and protest April 28th at The Big Ride 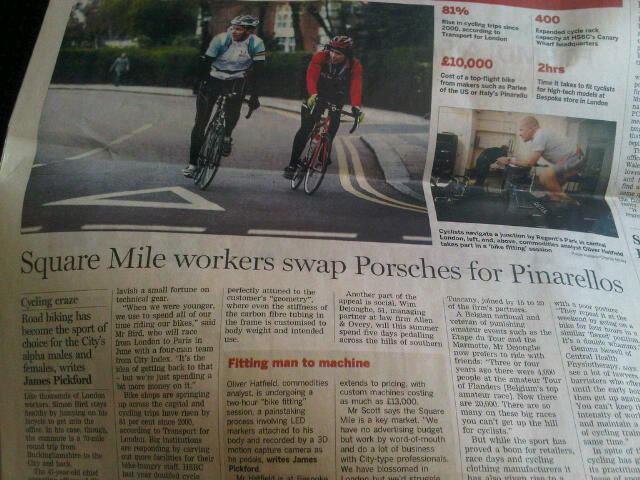 This weekend, the Financial Times carried a story on page three: "Square Mile workers swap Porsches for Pinarellos".
﻿﻿﻿
I read all about this in the FT on the way back from a surprise trip to Copenhagen. Where cycling looks rather different. There were plenty of folk dressed in lycra this morning pedalling down the city's bike lanes on their fancy road bikes.

But for the most part, people cycling around in Copenhagen looked a bit like these chaps on the bike path crossing over one of Copenhagen's bridges (pic on the right).

I was cycling right behind them and couldn't help thinking how different this Copenhagen bridge looked to the bridges in London where cycling looks a bit more chaotic. The contrast is shocking.


I hadn't been to Denmark for a few years and so I'd forgotten some of the detail. What struck me this time was that Denmark isn't so different from the UK. There are plenty of drivers racing about, doing what people do when they drive. But the real difference is that there is real bike infrastructure almost (but not entirely) everywhere.


Instead of having to squeeze into a few spare centimetres alongside moving cars, you spend a lot of your time cycling well away from fast-moving motor vehicles, like the folk in these pictures. As you move about, you realise that someone has thought about how to get you safely from A to B whether you're on a bike or in a motor vehicle.

You get the feeling that Copenhagen has decided what and who its streets are for. Copenhagen's Mayor said very clearly last week that the city's streets were about giving space back to people and taking it away from being the near-exclusive domain of motor vehicles.
﻿
﻿The question of who are streets are for is going to take a new turn in London this week. The founder of AddisonLee has apparently instructed his minicab drivers to take to London's bus lanes, claiming that keeping minicabs out of bus lanes "denies the public freedom of choice as journey times in the bus lanes are much quicker that those outside the lanes." This morning on BBC Breakfast, Addison Lee described its exclusion from bus lanes as 'discrimination'.

One way of another, Addison Lee has hit the nail on the head. The question Addison Lee is asking who are London's streets for? Are they for the benefit of 'people, urban life, and shops', as Denmark's Mayor thinks they are? Or are the streets meant to be places where people can travel 'quickly', the way Addison Lee describes them? I have a feeling Addison Lee might have put its finger on a much bigger issue than it realises.

For my part, I think the people being discriminated against on London streets are people in buses, on foot and on bikes. Bus lanes are being shortened so that we can fit more private motor vehicles through junctions and investment in bus lanes is being cut. Bike lanes are, for the most part just blue paint. Pedestrian crossing times are being reduced so that we can move more private motor vehicles around the city more quickly.

I certainly don't see why people in minicabs should get more of London's roads given to them, nor why they should be given more priority than people in buses or on bicycles. I also don't see why London streets should be designed simply for 'quicker' journeys for people in private motor vehicles.

I think London streets should be places where everyone can make journeys safely and conveniently, whether that's by bike, on foot, in a bus or by car or van. But if you make the streets places where minicabs get priority to travel fast, you reduce the ability of everyone else - bus users, people on bikes, people crossing the road - to go about their own business safely and conveniently.

I'm fed up of being intimidated on London's roads by drivers weaving in and out of traffic, cutting me up on my bike. And minicab drivers, as far as I'm concerned, are the absolute worst of the bunch. Fundamentally, I don't have an issue with minicabs being given access to bus lanes. But not until people on bicycles get proper infrastructure that keeps them well away from speeding minicab drivers on a mission to get around London as 'quickly' as possible. Not until pedestrian crossings are weighted in favour of pedestrians, not in favour of minicabs and private motor vehicles to make 'quicker' journeys. And not at the expense of bus passengers and their journeys.

It makes me even more determined to join thousands of likeminded people at Hyde Park, 11am on Saturday 28th April to tell AddisonLee our streets are for people. Fine, have your bus lanes but not until the streets are weighted to give the majority who aren't in small motor vehicles equal priority.