Urban routes with proper cycle infrastructure 6x more efficient and cost less. Time for the Mayor to ask why we're investing in a more expensive and more congested road network than we need?

Last year, I blogged about the new junction that Transport for London was building at Blackfriars Bridge. What shocked me was the fact that Transport for London was spending over £1million building a brand new junction and that, despite the fact that over a third of rush-hour traffic there consisted of people on bicycles, the junction (which was already pretty hairy) was going to be made more dangerous to cycle through. 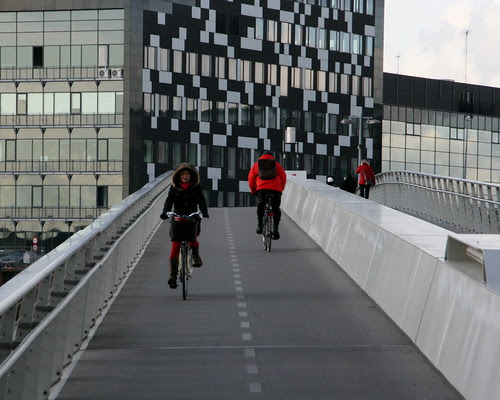 This bothered me for two reasons:

Firstly, because when roads are being dug up for other reasons, it seems an excellent opportunity to change the road’s design to make it safer to cycle through at very little extra cost.

Secondly, because, London was supposed to be experiencing a 'cycling revolution', as promised by Boris Johnson. In fact, he promised to 'transform the experience of cycling'. To achieve that, people needed to feel that the Mayor was doing everything he could to make cycling was a secure way of getting around. If people don’t feel secure on a bike somewhere, they will either take the long way round or simply not bother getting on a bike in the first place.

The thing that I found truly insulting at the time was the way in which Transport for London did neither of these things. Instead of planning to use the re-build of this junction to make it safer to cycle through, Transport for London spent a lot of effort justifying why it was choosing to pitch 'cyclist' traffic against motor traffic and pedestrian traffic in a way that made clear motor traffic was more important than either of the others.

Somewhat jaded by the experience of dealing with Blackfriars Bridge, I decided to look at how the Danish looked at a similar situation in Copenhagen, Bryggebroen Bridge - a 200 metre bridge for pedestrians and cyclists. Just like their counterparts at Blackfriars, the Danes ran a cost/benefit analysis on their investment. But this is where things diverge. In London, the focus was essentially 'how much motor traffic can we fit through this bridge in return for our investment and make the motor traffic flow better'. In Denmark, the measure was completely different, it was based on a measure of 'profit to society'. According to a report by the Cycling Embassy of Denmark: "The bottom line is that the bridge has yielded an expected profit to society of Dkr 33 million and a return rate of 7.6%".


Profit to society? What's that?

According to the Cycling Embassy of Denmark, the Danes calculate investment in cycling based on a cost / benefit model that calculates the total cost and total benefit to its citizens. So, in economic terms, a journey is considered as a combination of costs like fuel but also the cost of time, air pollution, noise, road attrition, congestion  and so on. The calculations show that per kilometre, the 'cost to society' of one urban bike journey is one-sixth an equivalent journey by car (in Danish kroner 0.60 per cycle kilometre vs Dkr3.74 per urban car kilometre). According to the Embassy, society saves approximately £0.30 per cycled compared to per driven kilometre.

In London, almost all of the dialogue around Blackfriars Bridge was based on a measure of "traffic flow", specifically motor traffic flow and how - in order to make the junction safer for cycling - other people making journeys by motor vehicle might have very slightly longer journeys. In other words, in London, the goal of the investment seemed to be that a more efficient motor traffic solution might equal some sort of economic benefit to someone. But it is anyone's guess who or how society benefits from this more efficient motor network because no one measures the return on investment that way.

If Blackfriars had been modelled using the Danish system, though, I think the end product would have looked very different indeed. In fact, I'd go one step further and say, not only did Transport for London fail to seriously integrate safer cycling into its new junction, it may - by encouraging motor traffic at the expense of cycle traffic - be charging London taxpayers an extra £0.30 per kilometre travelled over the Bridge. That's an awful lot of taxpayer money being wasted.

To be fair, I'm stretching the facts slightly by assuming the average additional 'cost to society' of each urban motor vehicle journey in the Danish model and applying it to each motor journey over Blackfriars Bridge. But I think the point stands: Blackfriars is emblematic of the fact that our transport officials are spending hundreds of millons to make our city centre road network more efficient for motor traffic. But this comes at a significant cost to all of us and it's a cost that we shouldn't have to pay for. Each urban motor vehicle journey costs society as a whole much more than a bicycle journey, just as the Danes say it does, because of increased pollution, road deaths and injuries, time wasted in congestion and so on.

I think it's time to change the model so that the true costs and benefits of the different modes of transport are calculated on a level playing field. London would not only start to look and feel very different if that happened, it would also have a more efficient transport network that works better for all of us and costs taxpayers much less than the current system.

The Mayor wants London to get back to business. Maybe he could start by looking at the way he allocates his road budget and adopt a cost/benefit model more like the Danish version.