London Cycling 2.0: has Boris Johnson rather subtly announced an 'evolution' of his cycling revolution? Or will it just be more bridges over the Thames for cars and nothing for cycling?


Boris Johnson, June 2012: "What has become clear to me is that we are now seeing a step-change in both the way that people choose to travel, and also in the way that cyclists are viewed on our streets. In response to this, I firmly believe that we must evolve our thinking and actions on cycle safety."

He also says: "The objective of the [Cycle Safety Action Plan] is to reduce the number of collisions on London’s roads involving cyclists. In particular, by providing safer infrastructure and taking action against irresponsible and dangerous road user behaviour and action to reduce collisions with HGVs."


This was Boris Johnson's written response to a question in the London Assembly last week. And a very telling response too.

So far, Boris Johnson's 'cycling revolution' has been very underwhelming. I rather naively voted for Boris Johnson back in 2008 (I'll finally admit). Why? Because he promised to build cycle super highways and to take cycling seriously. One of them goes 5 metres from my front door straight to where I work. And it's rubbish.

I thought what Boris meant was something like the picture on the left which shows a typical part of the massive protected bike network in Montreal. When I say massive, I mean massive, compared to London. 47% of the Montreal bike network looks like this. The network is over 600km long. By 2015 it will be 800km long. London has a few tiny sections of similar cycle network but they are nothing compared to Montreal.

What I didn't expect was that the Mayor would spend millions of pounds on blue paint that looks like, well, just some blue paint inside a bus lane or underneath a row of parked cars. AsEasyAsRiding blog has written a compelling account of just how utterly pathetic the Mayor's new cycle superhighway is that runs out to the site of the London Olympics. Cycle it if you dare....

The sort of protected cycle track that Montreal is building is being copied by cities all over the world. Most recently by Chicago and New York. New York is installing mile after mile of the stuff across Manhattan and into Brooklyn.


Why is Montreal doing this? The city's strategy is to improve mobility for its population and to enhance its economic potential. And it wants to do this by reducing people's need to drive in private cars. Montreal's strategy is almost identical to the strategy in New York, in Chicago, in Paris and in Frankfurt. All these cities want to reduce private car use, reduce congestion, reduce pollution and make their cities more mobile and more competitive. London and the UK government are unique in bucking the trend and building roads for more and more private motorists - almost the exact opposite of every other major economy. 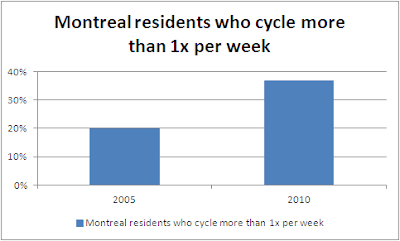 The most telling difference between the Mayor's cycling strategy and that in places like Montreal and New York is that these cities believe people will only start using bicycles when they get proper bicycle networks. And in Montreal, the figures bear that out. Some 37% of Montreal residents now cycle more than once a week, up from 20% in 2005. 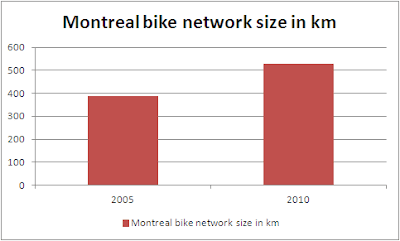 Why's that? Well, the city has added over 300km of cycle network since 2005, nearly half of it in the form of  protected bike lanes.

Why is Montreal building bike lanes and London isn't? Well, Montreal actively wants people out of private motor cars. And so it's taking space and re-allocating it so that people feel they can swap from car to bike. In a city like London where more than 50% of car journeys are under two miles, you can see why it would make sense to get people off their car seats and on to their bicycle seats.

Montreal has studied its 'cyclists' very closely. The city points out that only 10% of the people who cycle use the existing road network. However, 84% of them use the protected bike network. And 87% use quiet back streets. What's the message here? Simple, really. Most people don't like cycling in and around heavy, fast moving motor traffic.

Londoners don't have that luxury. To get anywhere in London, you need the confidence to cycle in multiple lanes of motor traffic through fast-moving junctions and to blend with HGVs, buses, taxis and cars. The conditions of the roads make you feel that you need need hi-viz, helmets plus a significant amount of cycle training. In Montreal, that simply isn't the case. You put on your normal clothes, you get on a bike, you start cycling. End of story.

That's what a 'cycling revolution' really looks like. Yet London's own cycling revolution is dominated by commuter cycling, not by mums, dads, older people or people with a disability. Boris Johnson notes there has been a 'step change in the way that people chose to travel'. Yes, there has if you consider a relatively small group of Londoners. But to really bring about a 'step-change in the way people chose to travel', you need mums, dads, older people and people with a disability to feel included and for them to feel they want to travel by bike. And most of those sorts of people, if you use Montreal as a case study, only travel by bike when there's a protected bike network.

In that context, I was slightly shocked to see the Mayor announce, through a question in the London Assembly, that he thinks the time has come to review cycle safety in London. So I'm going to take him at his word this time. His answer to the London Assembly suggests he thinks it is time to 'evolve' the way London's authorities think about cycle safety. Part of that solution, he says, is about 'providing safer infrastructure'. Montreal's been doing it for nearly a decade. New York City is copying Montreal. Isn't it time London did the same?

The London Assembly is conducting a review of cycling safety in London. You can find out more about the review and send them your thoughts about what should be done in London by emailing transportcommittee@london.gov.uk