A fascinating storm emerged on twitter last night, fed by someone who has cycled to work for the last nine months. And who happens to be a media spokesperson for Westminster council.

I first noticed this particularly eye-catching comment: "Why should cyclists all of a sudden get investment ahead of motorists?" made by Nick Thompson "an athletic press officer for Westminster City Council and former sports reporter" Nick Thompson made the comments in an exchange with the author of As Easy As Riding A Bike blog

There were plenty of people engaged in the conversation and for each question put to him, Nick Thompson found a way around it.

He put the point to one person on twitter that Amsterdam's cycle lanes are irrelevant to London because it's not a 'world powerhouse'. So I chipped in that he could perhaps look to New York as an example of good cycle infrastructure. Not good enough. "Just yellow taxis n traffic," he responded, "Straight lines only difference". Bicycle lanes only work in straight lines?

The list goes on. The road space is 'limited' in London, he says. The picture below shows the High Street in Leytonstone compared with a eerily comparable Dutch High Street. Note how the Dutch street has a bicycle lane along the left side and compare that with the rudimentary and dangerously-located Leytonstone equivalent. For plenty more examples of British streets compared with their Dutch equivalents, see David Hembrow's excellent collection. The point is that there's plenty of space. It's what you chose to do with it that matters. 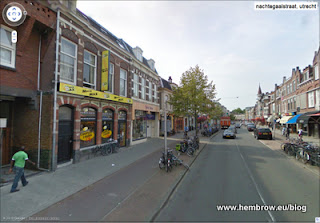 On the idea that slower car speeds on residential roads might benefit residents or increase safety not only did he ask 'where's the evidence?' but also stated 'but drive at 30/40/50 and see how much more you concentrate? All relative. Av speed in central London is already below 10mph'.

Transport for London used to say rubbish like this. It would talk about 'average speeds' in central London, completely ignoring the fact that motor speeds at night or on bridges can be unbelievably intimidating for people cycling or walking. There's also something slightly sinister about a press officer implying that driving at 50mph down a residential street might be something London should aspire to.

In part, it's because this is the voice of someone close to Westminster council. I've always found large parts of Westminster incredibly hostile to cycling. When the council implements new road schemes it rarely seems to think about how it could improve things for cycling or make them safer. In fact, it seems regularly to try and achieve the exact opposite.

Another part of me is simply astounded that Nick Thompson might think that cycling in London is fine as it is. He's not had a problem in nine months' cycling and he thinks everything's fine. He seems not to recognise a conclusion reached by The Economist magazine which states that although "More people are riding bikes...cycling is stuck in a niche". That niche is white, young, more affluent than average men. Men like Nick Thompson in other words.

In that context, I don't think it's acceptable to say the equivalent of, oh well, I'm alright cycling in London, therefore everyone else should be too. As The Economist puts it, the reason more people don't use bicycles in London is personal safety: "62% of people think it is too dangerous to cycle, and around 75% of women do. Accident rates have been falling in London, but 16 people died cycling last year. Cyclists insist that junctions like Elephant and Castle are life-threatening, especially when filled with heavy lorries, which account for many cycling deaths."


I think The Economist makes some good points. Paris, unlike London, has stressed that its cycling revolution is about getting people using bicycles to pedal calmly around the capital. In London it's all about fit young men like Nick Thompson and most people are 'cyclists' rather than your average Joe or Jane just getting about by bicycle. Paris has built infrastructure to enable everyone to get around by bike. In Copenhagen more women use bicycles than men - the exact opposite of London. New York is building infrastructure to enable pretty much anyone to get around by bicycle. The list goes on.


What frustrates me about Westminster is that there are only a handful of attempts to improve conditions for people to cycle there: Soho and Mayfair are a maze of one-way streets designed to disincentivise motor traffic but insanely complicated to use on a bicycle; Waterloo Bridge has a bicycle lane that is utterly useless most of the time because Westminster lets people park all over the bridge; the excellent Camden bicycle track through Tavistock Square takes you westwards into Westminster. As soon as you cross the boundary, the bike lane turns into a row of parked cars and you find yourself cycling between parked cars, two-lanes of fast-moving one-way motor traffic and a further lane of parked cars. The list goes on. Westminster hasn't even done the easy bits to make cycling a safer, more practical option than driving. You almost get the feeling that Westminster council doesn't want people to cycle.


I can't tell if Nick Thompson was simply trying to encourage debate or wind people up. But he concluded his twitter conversation with this statement: "...keep the suggestions coming, I assure you they do find the right ears. Thanks for the input."


If you're on twitter, send your suggestions for making Westminster less of a cycling desert to:  @NickPJThompson


Alternatively, email your local councillors by entering your postcode at Writetothem or look up your councillor on Westminster's website.

Let's see if Westminster council wants to take bicycling seriously. I'd love to hear if they get back to you.