Time to start taming cyclists? "In making cities fit for cycling, we must also ensure cycling becomes fit for cities". Too true. If we don't adapt as cyclists, we'll continue to be classed as "the silent menace"

Andrew Gilligan, the London correspondent of The Telegraph, is a big supporter of cycling in the capital. It is a topic he has long championed at the various newspapers he has worked for. Earlier this week, he wrote a piece on his blog, which talks about the fact that there has been a decline in the number of people cycling on London's trunk roads. Andrew's piece asks whether the decline might be down to the fact that people are talking more about whether it's safe to cycle or not.

I'm not sure I agree with that particular assertion but there are a number of points in Gilligan's piece that I agree with whole-heartedly. The first of those is this: "The emphasis on safety might end up being beneficial if it creates the political space for radical improvements to the cycling experience in London."

That is exactly the point.

Those of us who do cycle in London have coalesced around the issue of safety because it is something we all feel. In fact, according to Transport for London, the majority of cyclists will go out of their way specifically to  take a safer route: "A recent study of current cyclists in London found that cyclists were willing to increase their journey time to travel on better, safer routes. Current London cyclists are prepared to travel further to cycle in cycle lanes, bus lanes, on residential roads and would travel three times further to cycle on off-road routes." No surprises there.

Gilligan also makes the point that London roads aren't as dangerous as the media has recently made them out to be. He concludes: "So we should never stop talking about safety. It is and always has been the biggest reason why people do not take up cycling. But perhaps we should think a bit more about how we talk about it."

I am going to rise to that challenge. And I think there are two issues where we need to think about how we talk about cycling.

The first of those is what we define as a 'cyclist'. In the same report I mentioned earlier, Transport for London states that "less confident cyclists will try to avoid" busy trunk roads (page 122).

I would like Transport for London to ban use of the phrase "less confident cyclist". My niece is seven. She's a very confident cyclist. But she doesn't like cycling with cars on busy roads. What would it take for her to cycle to school, the same way that half the children her age cycle to school in Denmark? Transport for London's report would imply she needs to be a fit, 20-something adult with the wits and strength to keep pace with the motor vehicles. At that point she will be a "confident cyclist". We don't design roads only for "confident" drivers. So why are solutions acceptable that are only for "confident" cyclists? 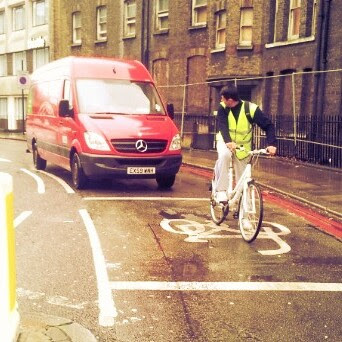 This "cyclist" is actually a minicab driver from AddisonLee,
being given cycle training by David Dansky

The second issue I think we need to address is what other people think about "cyclists" - in particular what those people who don't yet cycle, but might want to switch to their bikes if they felt the conditions were safe enough.

If you have time, I would echo a recent blog post by As Easy As Riding A Bike who points to the work of Dave Horton. Dave is a sociologist and over recent months has been writing a fascinating series of blog posts "Cycling Struggles" in which he interviews people about cycling, about why they do or don't cycle and about how they cycle. What he finds, is that many of us are conditioned to cycling fast because we cycle mixed with motor traffic. Mixing with pedestrians means 'slowing down'. What happens when you force people on bikes to slow down and mix with pedestrians often makes for unhappy reading.

It is the fear of pavement cycling that (I think) makes it somehow socially acceptable for David Kent, London engagement officer of Guide Dogs for the Blind to tell The Evening Standard that his organisation opposes protected bike lanes because cyclists are - in his words: "the silent menace". It makes my seven-year old niece sound like the grim reaper.

We need to create an environment where people - any sort of people - feel that cycling is a safe, sensible way to get about. And to achieve that, we need to accept that cycling cannot be the domain solely of those of us already "confident" enough to mix with the cars, leaving everyone else to play hopscotch with their bikes on the pavement.

There's a deal to be struck. The Mayor, the boroughs and Transport for London need to create a safe, convenient and continuous network of routes for people to cycle on. Whether that's by creating protected space for cycling on main roads or by linking quiet or traffic-free streets.

And in return, all of us need to encourage cycling to be about everyday people, doing everyday things.

This is exactly the point that Mark Treasure makes in his blog post and I think he's absolutely right:

"It should be quite clear that for ‘fast’ cyclists, their behaviour will have to adapt (I include myself in this group). You will no longer be able to hammer through some parts of London. You will have to be more responsible in certain areas, particularly outside shops and bus stops. You will have to watch out for pedestrians, who will be often be unpredictable. This isn’t just about cycle tracks around bus stops; It’s is a necessary component of creating a more liveable city. We’ve ended up with a cohort of cyclists trying to act like motor vehicles, and as we tame the motor vehicle, so we will have to tame precisely these cyclists."

At times, I am a fast cyclist. I am training for a race at the moment, as it happens. But I also cycle to the supermarket.I cycle to work. I cycle to the cinema. These are all very different types of 'cycling'. Ultimately, all of these types of cycling need to be accommodated but that might mean making some compromises. Should I be able to train for racing through central London, for example? I wouldn't expect to practice racing a car through central London.

There is a whole series of dilemmas and debates around these sorts of issues but, ultimately, they all revolve around finding a place for cycling that everyone can buy in to, not just people who already cycle. In his post on the Telegraph's website, Andrew Gilligan suggests we need to think about changing the language around cycling. I think he's right. The language we need to find around cycling is about making cycling something that works for most people all across the country. And to achieve that, we will have to think about what cycling should look like in our towns, cities and villages.

I'll leave with the words of Dave Horton that echo this point well: "There’s work to do here; and in making cities fit for cycling we must also ensure cycling becomes fit for cities."