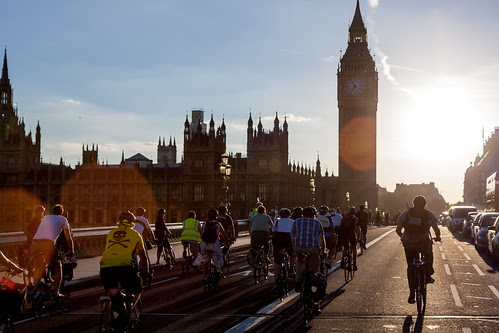 Earlier tonight, more than 60 MPs attended a back bench debate about whether to support the Get Britain Cycling report, published by the All Parliamentary Party Cycling Group. After a whopping four hour debate, they voted unanimously to support the Report. One MP think that maybe 100 of his colleagues passed through the Chamber in total, which is an amazing number for a debate like this. (You can read more details on bikebiz)

Meanwhile, as the MPs debated, a one-mile long queue of people on bikes threaded their way past Parliament to show their support for the MPs and asking them to think bold and deliver bold. You could see people in the flashride leaving Westminster Bridge as others had already crossed Lambeth Bridge further upriver.

And we need the government to be bolder. As Maria Eagle, the shadow transport secretary rightly said in the debate, the Government's support for cycling has hitherto been very lacklustre. She spelt this out last week in an eight point plan that is well worth a read.

The problem with the vote is that it doesn't really mean anything at this stage; it is (as far as I understand) no more than a statement of support. It doesn't compel the government to actually do anything. The government has at last started dribbling some money towards cycling after killing off the cycling budget in its bonfire of the quangos a couple of years ago. But it is patchy money, limited to a handful of locations that will benefit less than 10% of the population for about two years. As Chris Boardman of British Cycling put it so eloquently (as is his usual skill), we have a government that has committed over £15billion to road widening and new bypasses for the next 10 years. But it has only committed £159 million to cycling and even then only for a couple of years' worth of funding. To coin a phrase from Boris Johnson, cycling is getting 'chicken feed'.

Probably the best two announcements to come from the government in relation to cycling are a) a review of the sentencing guidelines around what constitutes 'dangerous' vs 'careless' driving and b) an admission that police should be able to enforce 20mph speed limits. All very car-centric, albeit important.

To be fair to the Mayor of London, London is actually starting to get serious about bicycle transport at last. Later this summer, our first European-style cycle highway opens between Bow and Stratford. And some serious money has been hard fought for and won by Boris Johnson. In all honesty, he should have done this five years ago, but he has now genuinely stuck his neck out for cycling in my view and we'll start to see real changes happening over the next couple of years.

But the rest of the country gets virtually nothing. We have, in the Department for Transport, a government ministry that has been institutionally anti-cycling for decades. We have in the Secretary of State for Communities & Local Government, a government minister who thinks cycling equals "people who wear rubber knickers" and is wilfully blind to the idea that bicycle transport could help revitalise communities across the country (because it's not yet popular enough among the majority of people?). And we have endless big budget road building schemes and same old thinking from government (both this one and the last one to be honest) that will force people to be ever more dependent on private cars.


Compare that with Germany. In Berlin over 25% of motor vehicle trips are what the authorities call "free time" or "leisure" trips and the majority of those trips are relatively short. It's more or less the same in the UK. The difference is that Berlin (and other cities in Germany) want people out of their cars for these sorts of journeys and on bikes (especially electric bikes) instead. And they're building for it, with electric bike corridors, 'bike-friendly' shopping centres and so on. We, on the other hand, have a government obsessed with clunky, space-wasting, inefficient, expensive private motor cars for every trip. Our government seems incapable of realising the massive inefficiency of encouraging everyone to use a car for almost every journey. It is political populism and wilful ignorance of the alternatives in the extreme.


BBC London report on #spaceforcycling. It's a fairly shocking but important report

People came tonight for a whole host of reasons. Some wanted to say that the Mayor of London wasn't doing enough (and my view is that he is starting to do the right thing, and is starting to do it well but way, way, too late), some to say the government isn't doing enough. And an awful lot of us wanted to pay thanks to the MPs who are championing change, not least among them the members of the All Party Parliamentary Cycling Group and in particular Julian Huppert MP (LibDem), Ian Austin MP (Labour), Sarah Wollaston MP (Conservative) under the watchful eye of Lord Berkeley (Lab).

And if you need further reminding of why so many people came out tonight, I suggest you watch one of the two news clips from ITV or the BBC. They're both pretty shocking and they justify why many people were out on their bikes this evening: