Should TfL bosses have taken £6million from the cycling (safety) budget to spend on Tour de France promotional work? Would it be acceptable for the Highways Agency to sponsor Formula 1?

Earlier today, the BBC's transport correspondent Tom Edwards posted a tweet of a Transport for London banner adorning the finish line of the Tour de France. I went to see the Tour in France last year and in Yorkshire this year. I'm a fan. What I am by no means a fan of, however, is what Tom Edwards tweeted later this afternoon "TfL confirm the £6m to host @letour comes out of the cycling budget with the aim of promoting tourism & cycling". I don't know where Tom Edwards got his numbers from but, as TfL seems to have confirmed them, they are as good as true. 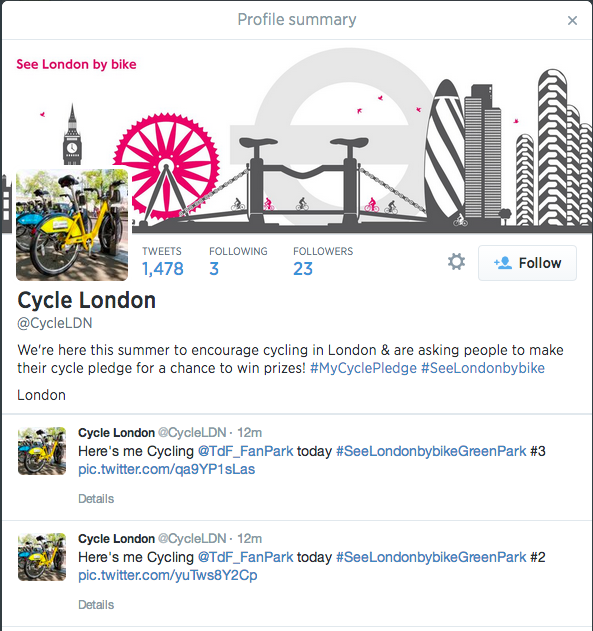 Pictured left is an example of something that seems to be funded by Transport for London 'with the aim of promoting tourism + cycling'. It is a, frankly, dreadful social media account that, despite 1,478 tweets has garnered only a whopping 23 followers as part of a patronising #MyCyclePledge campaign that has been running in the build-up to and during the Tour. I can't be sure that TfL has taken £6million from the cycling safety budget specifically to fund this spectacularly pointless Pledge campaign and twitter account but it feels awfully like this may be just one example of Tour funding by our transport authority pinched from the cycling budget. I would imagine that other examples include nice corporate hospitality at the Tour this evening for some TfL folk. Exactly those same senior TfL names who have failed to support safer cycling in the capital.

At this point I think it is worth pointing out there are many different faces within TfL. It is a massive organisation. There is now, in my view, a (still far too small) but solid team of people committed to delivering on cycling. If you're on twitter and into this stuff or you attend any London Cycling Campaign local group meetings you will know and probably liaise with any number of 'good' people within TfL who are advocating and pushing for positive things for cycling in London. Over time, I am confident that they will make some of these things happen.

But I have always felt that there are senior figures, in particular board level figures such as the spectacularly misinformed TfL Head of Surface Transport, Leon Daniels (for some of the numerous examples I can think of, see this Olympics piece and this more general piece or this from As Easy As Riding A Bike) who simply have no truck with cycling. I described Leon Daniels in 2011 as "the enemy" and, having appeared on television with the man, I would still stand by that statement nearly four years later.

And just as much as the 'good guys' at TfL are conspicuous by their hard work and their presence within the cycling community, people like Head of Surface Transport, Daniels or TfL Commissioner Peter Hendy are pretty conspicuous by their sheer absence on cycling. Where are the senior TfL figures telling Camden that its plans for Tottenham Court Road are hopelessly inadequate for cycling, for example? Not a peep. Where are the senior TfL figures when it comes to sorting a way for people to cycle around Bow roundabout? They only crop up on the defensive, never to champion progress. For goodness sake, there still isn't even a pedestrian crossing at Bow roundabout. Any positive word about that from the senior board members at TfL? Nope, none at all.

It is in this context that I'm deeply bothered by TfL spending £6million of 'cycling safety' budget on tourist promotional support for the Tour. Just to put that amount in context, the average being spent to sort out 33 horror junctions like Elephant & Castle over the next couple of years is £9million per junction. In other words, that means we could probably have seen 34 junctions on this list but it feels awfully like one might have got dropped for some champagne, a lousy twitter account and some hoardings on the final sprint.

The 'cycling revolution' in London still feels very fragile. We are still waiting to see the rollout of the first cycling 'Quietways' and some time this week, I believe we'll see the first drafts of the revised Cycle Super Highway plans for Vauxhall to Pimlico. I have to hope these are both better than the Camden-led designs for Tottenham Court Road and Gower Street.

What I want to see is a TfL transport commissioner or the TfL Head of Surface Transport stand up and shout for cycling. The Mayor can shout all he likes but it is ultimately TfL's job to deliver. And the top brass at TfL who need to insist on that delivery.

The last time Hendy stood up for cycling was in 2005 when he issued the new London Cycling Design Standards and promised that "all new TfL-funded schemes will comply with these cycling standards". That never happened. The draft new London Cycle Design Standards were published last month. In a few weeks' time, the same man is likely to approve the new Standards. Question is, whether he will be any more effective at implementing them than last time? I seriously doubt it. That said, I would imagine that Messrs Hendy and Daniels might well have known or at some stage signed off on transferring £6million from the cycling budget to a Tour de France advertising budget.

I love the Tour. I think it's fantastic it came to London. But do I think that money from the cycling infrastructure budget should be funding it? No I don't. There are plenty of other sources for this sort of thing, appropriate sources at that. This, I'm afraid, doesn't feel appropriate.