Zac Goldsmith published his cycling manifesto today. Cycling should be a vote winner for him but he's really failing to impress so far.

Earlier this evening, Zac Goldsmith told a crowd in Richmond that: "I’m positively hounded by cycle campaigners who just seem to be about one thing, and you’re either with them or against them." It sounds like George Bush and the war against terror. And it's not true, frankly.

Cycle campaigners are a tricky lot. There are, I have to admit, some grumpy and rather strongly-opinionated folk in the cycle campaigning community. I've argued with plenty of them.

Opinionated and grumpy, they may be. But they are also, as a rule, passionate, knowledgable and articulate. And they don't take kindly to people who tell them only half truths.

And what's more, pretty much anyone who has been on a bike in London is a 'cycle campaigner'. They have to be. Because they know all too well what it's like to be threatened by proper danger as they get about the place on a bike.

So I don't really understand why Zac Goldsmith told an audience in Richmond earlier today that 'you're either with [cycle campaigners] or your against them'. If you have time, have a read of the very fair summary of that meeting by Tim Lennon. 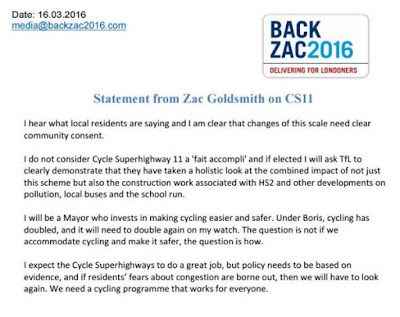 Earlier this week, TfL announced that a whopping 6,400 people had responded to its consultation to build a cycle highway via Regents Park to Swiss Cottage. Two-thirds of those people supported the cycle highway. There has been considerable local opposition, however, whipped up by someone who goes under no name on twitter. In order to get names on a signature (4,000, I believe), the campaign has presented 'facts' about the cycle highway that have been less than entirely honest.

Yet Zac Goldsmith has said the cycle highway here is not something he "consider[s] a fait accompli".

He says that "the question is not if we accommodate cycling and make it safer, the question is how". Well, I would like to know how Zac proposes to make cycling safer in London. Will it mean helmets and more training? Or will it mean safe, proven, infrastructure for cycling?


The early signs are that London's very new cycle infrastructure is working. Last week, Boris Johnson published a report written by his cycling commissioner, Andrew Gilligan, which showed just how well its working. The report is pretty clear - the number of people cycling is way up on these routes. Congestion has not increased for other road users.

Does Zac mean he'll promise more of this? More segregated infrastructure on main roads? More roads made quieter for locals as well as for people who want to get about on foot or on a bike?

It's really not clear. He has already said that he hopes the cycle highways work but 'If the evidence showed that they didn't work, you'd have no choice but to rip them up.'  Does that mean that if people stand around with posters saying the cycle highways 'don't work' that he'll rip them up?

Zac's cycling manifesto was published today. And the bulk of it seems to be about extending cycle hire.

At one point he talks about cycle highways and quietways. He says he'll "protect TfL's investment budget". He very specifically does NOT say he will protect the hard-fought for 10 year cycling budget (of which we have only seen the first year's investment).

Maybe Zac Goldsmith reckons he can win London by attacking cycling. But the thing is, all those cycling campaigners, yes, they are grumpy. But they are passionate. And I reckon they can swing a lot of voters who might vote Zac.

I am a swing voter when it comes to London politics. I want what's best for my city. As many of you know, I was hugely critical of Boris Johnson's 'cycling revolution' when it started. But Boris's team won me over because I felt they could deliver. And they have started to deliver.

I am not, I think, a natural Sadiq Khan supporter. Yet, when the London elections come round in two months' time, my swing vote may swing that way.

Zac Goldsmith is making it really hard for me to vote for him, unless he massively changes his tune on cycling and commits to proper continuation of the cycling investment plan.

There's still time for Zac Goldsmith to win the cycling vote. But he needs to show he takes cycling seriously. He hasn't done that yet, I'm afraid.

London Elections: I didn't expect to be thinking of voting for Sadiq. I'm still not sure if I will. But, unless Zac Goldsmith changes his tune on cycling (and on buses, to be honest), he's completely lost my attention.

London votes in May on its new Mayor to replace Boris Johnson. Lots of people I know don't vote. I think that's a real shame. At the last Mayoral elections, cycling was a really hot issue. And there was no way that the Mayoral candidates could get away from the fact that people wanted safe space4cycling. It was that pressure on the candidates that finally helped swing Boris Johnson towards (belatedly) building the proper, safe cycling facilities that are rolling out across London right now - whether those are cycle highways that take you through some of our city's scariest junctions or the quieter routes on local borough roads. In my view, if you care about your city, you should be voting.

As I've said recently, I feel Boris really over-promised in his first Mayoralty. Lots of blue paint, lots of PR, lots of 'manning-up' and 'keeping your wits about you' as you darted through massive, scary road junctions. That all changed in his second term and we're seeing the results of that change in policy only now. The Embankment cycle highway is only a few months off finishing; Oval junction is unrecognisably safer; CS2 now leads out east (although needs improving) and there are plans all over London (with the exception of Kensington & Chelsea who have adopted a do-nothing approach).
To some extent, the heat has been taken out of the cycling debate. There's less antagonism at a policy level. But there's loads of antagonism in specific local hotspots around London. The residents of Swiss Cottage seem to be getting their pitchforks ready to kill off cycle highway 11 through Regents Park and there's loads of local anger up in Highbury as well. Lots of very noisy people want to drive, drive, drive. And be gone with the rest of you.

It's really interesting seeing how the various Mayoral candidates are responding to this.

First off, I'm going to mention Caroline Pidgeon (LibDem). I mention her first, as a lot of people seem to have written off the LibDems. But I'm going to stick my neck out here. Caroline has consistently backed cycling and she is the only London Assembly Member standing again this year who has really fought for cycling all the way through. Meanwhile, the Green's Sian Berry is making all the right noises as well.

So far so good.

But the people I really find interesting in all this are Labour's Sadiq Khan and Conservative Zac Goldsmith.

I don't think I'd cast myself as a natural Sadiq supporter. But his campaign is really grabbing my attention. I didn't originally think it would. In the past, Sadiq had appeared on the odd bicycle in photo shoots for Lambeth Cyclists but that was about it. More recently, he's been going gangbusters to woo the cycling vote. Sadiq's cycling plan commits to continue investing in the cycle highways, in safer junctions and in 20mph zones as well as the Quietway programme. He's appeared pedalling about with Chris Boardman and told him he wants to "make London a byword for cycling".

Before he was selected as the Conservative candidate, Zac Goldsmith was full of promise. He told the Stop Killing Cyclists that more cycling was part of his plan to stop our city from "grinding to a standstill" and to reduce air pollution. He also promised to commit to cycling in his manifesto.

And since then?
Well, there's nothing I can see from him about cycling in his manifesto other than a wishy washy commitment to "safer cycling". What there is instead, is a series of bizarre statements:

He told LBC radio that he would let electric cars into the bus lanes and that within two to three years there would be "no point having bus lanes". I mean, seriously? If you're a bus user or a cyclist, this sounds like hell.

I didn't expect to be thinking of voting for Sadiq. I'm still not sure if I will. But, unless Zac Goldsmith changes his tune on cycling (and on buses, to be honest), he's completely lost my attention.

Oh, by the way, try and remember to vote please. It does make a difference :-)