Blackfriars - a timeline of everything you need to know 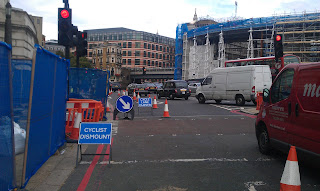 For a full and comprehensive review of just how awful Blackfriars Bridge was in 2005, please look at this site . Some slight improvements were made after two people were killed as a direct result of this layout. The new TfL-designed layout is surprisingly similar to the original killer-layout.

In 2005, Transport for London promised to take forward two options. Either to implement a proper double T-junction scheme at the bridge (cost £700,000) or to significantly widen the cycle lanes and create safer cycle and pedestrian crossings (cost £200,000). We're still waiting for the double T-junction to happen and think its scandalous that, despite a massive national rail project that includes a complete re-build of the junction, nothing is happening and, if anything, the situation will be getting worse than it is now.

1) How it all started. TfL gave people five days, including a weekend, to review plans for the bridge

3) Val Shawcross steps in and TfL postpones its plans

5) Why this bridge needs space for cycling. A video retrospective.

8) The revised scheme. A motorway with a bit of cycle lane in the gutter

9) Cyclists realise that TfL has only added a cycle lane one way but still increased the speed limit and added new lanes for motor vehicles, making the whole junction more,not less dangerous.

14) Elephant & Castle roundabout - here we go again. It's Blackfriars all over again

17) TfL simply ignores the London Assembly, the Mayor, the protests, the petitions. Bulldozers will go ahead regardless. 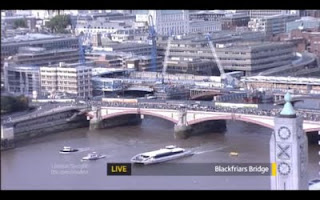 18) Flash ride number two. Thousands of people hook up on their cycles to protest. BBC and ITV film live.

19) Cyclists told to dismount on the junction. Where the hell are you supposed to go if you are on a cycle?

21) Another bridge, another failure by the Mayor. Boris Johnson killed off proposed walking/cycling bridge and built a tourist attraction instead

23) London Cycling Campaign releases vision for Blackfriars and all major London roads that would be pretty average in most cities but the Mayor will probably decry as too expensive/too complicated for London. None of which is true.