Cyclists in the City and ibikelondon blogs would like to invite you to join the central London flashride this Saturday 12 November to protest for safer cycling on London’s main roads and junctions. Our route will focus on Lambeth, Southwark, Westminster and Camden. We will skirt arund the City of London to avoid clashes with the Lord Mayor's show. 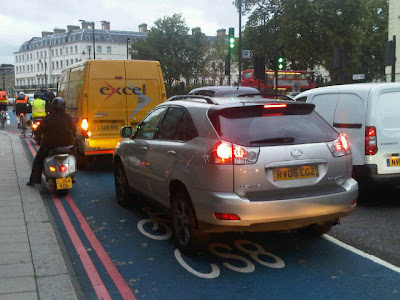 We're tired of Transport for London's total lack of tranparency; of its agenda to stuff more and more motor traffic through London's streets; of its total failure to consult with or engage with people who walk or cycle; of hearing again and again that cycling deaths don't matter because we might get in the way of 'the traffic' or that cycle facilities can't be built because of possible congestion. We're tired of cycling being 'designed out' of central London by narrow streets that leave you nowhere to go on the road.

We're asking for safe routes for normal people to cycle to normal places. To no longer be shunted down dark and dingy back routes through industrial estates. To be taken seriously with proper, safe infrastructure that gives cyclists the same right to safe streets as motorists. And to no longer be fobbed up with scraps of infrastructure - the bits that Transport for London can fit in only after they've designed our streets for motor vehicles.

It's not good enough. And it's killing people.

We ask that our children, our parents, our teachers, our colleagues - everyone should feel they can get on a bicycle in London and cycle safely and easily to where they want to go. That the 60% of trips taken by car in outer London that are under three miles could be made by bicycle.


Because at the moment, London is being designed so that you don't have a choice. You can drive. Or you can drive. But if you want to cycle your kids to school, it's too dangerous. It shouldn't be.

Tower Hamlets Wheelers will be organising a feeder ride from Bow roundabout - scene of another recent cyclist fatality - and we will be joined by co-hosts from Camden, Merton and Lambeth Cyclists. We are expecting at least 100 people to join. The police have offered to support the ride and we have 10 lovely LCC volunteers to marshall us. With many many thanks to the very good people of the various LCC borough groups who are supporting this and helping make this happen. Please join us to make the message loud and clear.

We depart St Mark's Church, The Oval, Kennington, SE11 4PW at 10.30AM - prompt departure, directly on Oval junction just next to the Saturday morning farmers market. We expect to finish up at Look Mum No Hands cafe by around 12.3oish

The route will take in the most dangerous junctions for cycling, as defined recently by Transport for London. We will be stopping a couple of times on the way, including to pay our respects at Kings Cross.

Some local reporters and one national newspaper (full details once they’re confirmed) have indicated they plan to join us. We hope to be joined by a number of photographers, bloggers and Jack of the bikeshow on resonancefm.

Please join the ride. We need to make this message loud and clear.